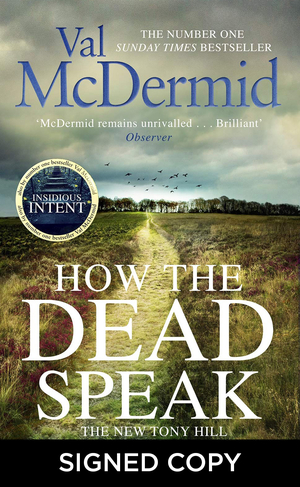 Signed by the author. 'The queen of crime is still at the top of her game' Independent 'No one can tell a story like she can' Daily Express 'One of today's most accomplished crime writers' Literary Review After an explosive case that forced Tony Hill and Carol Jordan to reassess everything they thought they knew about right and wrong, both are dealing with the fallout in their own separate ways. While Tony must pay the price for his actions, Carol is conducting investigations into suspected miscarriages of justice. But when a shocking discovery is made on a construction site, and skeletal remains are found to belong to a killer who is supposedly alive and in prison, suddenly, Tony and Carol are brought into each other's orbit once again . . . The next eagerly anticipated, electrifying thriller from number one bestseller and queen of crime, Val McDermid, featuring the unforgettable Tony Hill and Carol Jordan.

Val McDermid is a number one bestseller whose novels have been translated into more than thirty languages, and have sold over fifteen million copies. She has won many awards internationally, including the CWA Gold Dagger for best crime novel of the year and the LA Times Book of the Year Award. She was inducted into the ITV3 Crime Thriller Awards Hall of Fame in 2009, was the recipient of the CWA Cartier Diamond Dagger in 2010 and received the Lambda Literary Foundation Pioneer Award in 2011. In 2016, Val received the Outstanding Contribution to Crime Fiction Award at the Theakstons Old Peculier Crime Writing Festival and was elected a Fellow of the Royal Society of Literature. In 2017, she received the DIVA Literary Prize for Crime. She writes full time and divides her time between Edinburgh and East Neuk of Fife.