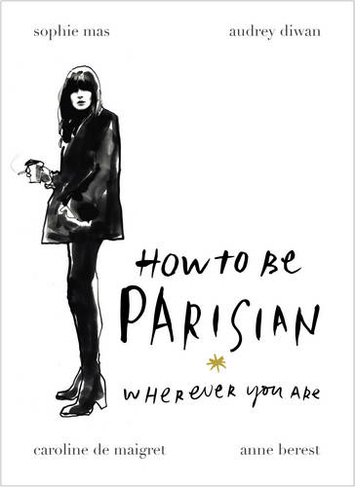 How To Be Parisian: Wherever You Are

How To Be Parisian brilliantly deconstructs the French woman's views on culture, fashion and attitude. Bohemian free-thinkers and iconoclasts, Anne Berest, Caroline De Maigret, Audrey Diwan and Sophie Mas cut through the myths in this gorgeous, witty guide to Parisienne savoir faire. These modern Parisiennes say what you don't expect to hear, just the way you want to hear it. They are not against smoking in bed, and all for art, politics and culture, making everything look easy, and going against the grain. They will take you on a first date, to a party and through a hangover. They will tell you how to be mysterious and sensual, make your boyfriend jealous, the right way to approach weddings and the gym, and they will share their address book in Paris for where to go at the end of the night, for a birthday, for a smart date, for vintage finds and much more. Full of wit and self-deprecating humour, How To Be Parisian explains those confusing subjects of clothes, makeup, men, culture and lifestyle as only a true Parisienne can.

Anne Berest is the author of two novels and a biography of Francoise Sagan published this year; she also writes for television, filmand theatre. Audrey Diwan became a scriptwriter after studying journalism and political science. She wrote the screenplay for Cedric Jimenez's La French, with Jean Dujardin, and is now directing her first feature film; she is also editor-at-large for Stylist magazine. Caroline de Maigret studied literature at the Sorbonne before moving to New York to model. She returned to Paris in 2006 to found her music label. De Maigret has been an ambassador for Chanel since 2012, and supports women worldwide through the NGO CARE. In 2014, she became a muse for Lancome. Sophie Mas was born and raised in Paris. After graduating from Sciences Po and HEC, she started her own film company and now works as a producer in Los Angeles, New York and Sao Paulo.