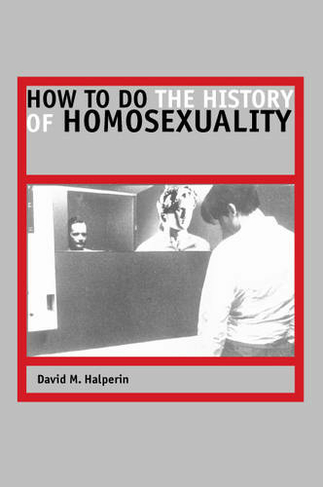 How to Do the History of Homosexuality

David M. Halperin is one of the most eminent thinkers in the world of gay and critical studies. In this new work, he revisits and refines the argument he set forth in "One Hundred Years of Homosexuality": the idea that both hetero- and homosexuality are not biologically determined but, instead, socially constructed. "How to Do the History of Homosexuality" builds on this seminal argument, answers its critics and makes greater allowances for continuities in the history of sexuality. Above all, Halperin offers a vigorous defence of the historicist approach, one that sets a premium on the description of other societies in all their specificity and otherness instead of forcing them to fit our own conceptions of what sexuality is or ought to be. Dealing with male homosexuality and lesbianism, this volume first recovers the radical design of Michel Foucault's approach to the history of sexuality. Halperin salvages Foucault's teachings from common misapprehensions and misreadings, then makes them newly available to historians as an impetus for innovation in the field. Exploring the broader significance of historicizing desire, Halperin also questions the tendency among scholars to reduce sexuality to a mere series of classifications. Then, in a theoretical tour de force, he offers an altogether new strategy for approcaching the history of sexuality - one that rehabilitates the constructionist approach by readily acknowledging continuities across space and time. Controversial, impassioned and revelatory, "How to Do the History of Homosexuality" is a book that could only have been written by David M. Halperin. It should prove to be valuable reading for anyone interested in the history of sexuality. 3 halftones, 1 figure

David M. Halperin is the W. H. Auden Collegiate Professor in the Department of English Language and Literature at the University of Michigan and Honorary Professor in the School of Sociology at The University of New South Wales. He is the author of a number of books, including One Hundred Years of Homosexuality and Other Essays on Greek Love and Saint Foucault: Towards a Gay Hagiography. He is also the cofounder and coeditor of GLQ: A Journal of Lesbian and Gay Studies.