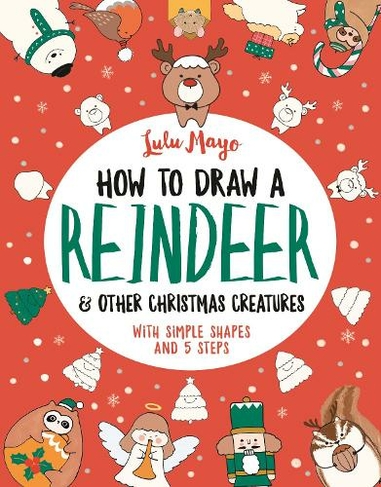 How to Draw a Reindeer and Other Christmas Creatures: (How to Draw Really Cute Creatures)

Learn how to draw cute Christmas creations in Lulu Mayo's unique and quirky kawaii style, using simple shapes and easy-to-follow steps. From a jolly Santa and a leaping reindeer to a stylish snowman and an ice-skating robin, there's tons of festive fun to be had sketching Lulu's adorable characters. With 30 step-by-step projects in total, plus additional drawing activities and creative prompts, this book is guaranteed to capture readers' imaginations and get them ready for the holiday season.

Lulu Mayo is an award-winning illustrator with an eye for the quirky and idiosyncratic. Her work is energetic and often contains humorous and fantastical elements. She studied for a Master's degree in illustration at the University of the Arts London and has designed greeting cards, posters, editorials, window displays and much more. Lulu is the illustrator behind the best-selling A Million colouring book series, featuring A Million Cats, A Million Dogs, A Million Owls, A Million Bears, A Million Sloths and A Million Unicorns. She is also the creator of Cattitude: Drawing Cats for Creative People, How to Draw a Unicorn and Other Cute Creatures, How to Draw a Mermaid and Other Cute Creatures and How to Draw a Reindeer and Other Christmas Creatures.www.lulumayo.com@lulu_mayo_art