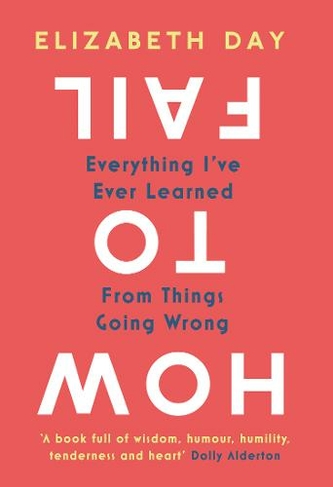 How to Fail Everything I'Ve Ever Learned from Things Going Wrong

Inspired by her hugely popular podcast, How To Fail is Elizabeth Day's brilliantly funny, painfully honest and insightful celebration of things going wrong. This is a book for anyone who has ever failed. Which means it's a book for everyone. If I have learned one thing from this shockingly beautiful venture called life, it is this: failure has taught me lessons I would never otherwise have understood. I have evolved more as a result of things going wrong than when everything seemed to be going right. Out of crisis has come clarity, and sometimes even catharsis. Part memoir, part manifesto, and including chapters on dating, work, sport, babies, families, anger and friendship, it is based on the simple premise that understanding why we fail ultimately makes us stronger. It's a book about learning from our mistakes and about not being afraid. Uplifting, inspiring and rich in stories from Elizabeth's own life, How to Fail reveals that failure is not what defines us; rather it is how we respond to it that shapes us as individuals. Because learning how to fail is actually learning how to succeed better. And everyone needs a bit of that.

Rated 5 out of 5 by SLT123 from Love it! I’m a huge a fan of this woman. First discovered her work with her fourth novel, The Party. Have since worked through her backlist and then of course have listened in awe at the podcast series “how to fail” which this books takes its inspiration from. This book though is more than an accompaniment to the podcast. It’s more memoir than self help. And far more personal, honest and raw than I was expecting from the outset. Chapters on relationships and babies brought me to tears, yet at other times I was smiling and laughing and nodding in agreement with Days wisdom. Felt I’d been granted access to a life in a similar way to Maggie O Farrells I am, I am, I am. Revealing to a point, but without feeling like a voyeur. I wish there’d been writers like Elizabeth around when I was a teen. Maybe I’d have failed less! But then, as she absolutely demonstrates failures are a necessary part of our life which allow us to become our true selves.

Elizabeth Day is the author of four novels. Her acclaimed debut Scissors, Paper, Stone won a Betty Trask Award and Home Fires was an Observer book of the year. Her third, Paradise City, was named one of the best novels of 2015 in the Evening Standard, and The Party was an Amazon bestseller and a Richard & Judy bookclub pick. She is also an award-winning journalist and has written extensively for The Times, the Telegraph, the Guardian, the Observer, Harper's Bazaar and Elle. She is currently a columnist for the Mail on Sunday's You magazine and host of the iTunes chart-topping podcast, How To Fail With Elizabeth Day.