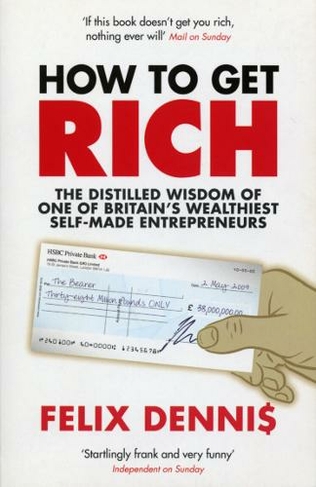 How to Get Rich

By Felix Dennis (Author)
Paperback
https://www.whsmith.co.uk/products/how-to-get-rich/felix-dennis/paperback/9780091921668-12-000.html N/A
GBP
Availability
Currently unavailable. We dont know when or if this item will be back in stock
Free Saver Delivery on orders over £25
Details
FREE SHIPPING over £25 for Saver Delivery
Share

'Making money is a knack, a knack that can be acquired. And if someone like me can become rich, then so can you - no matter what your present circumstances. Here is how I did it and what I learned along the way.' So writes Felix Dennis, who believes that almost anyone of reasonable intelligence can become rich, given sufficient motivation and application. How To Get Rich is a distillation of his business wisdom. Primarily concerned with the step-by-step creation of wealth, it ruthlessly dissects the business failures and financial triumphs of 'a South London lad who became rich virtually by accident'. Part manual, part memoir, part primer, this book is a template for those who are willing to stare down failure and transform their lives. Canny, infuriating, cynical and generous by turns, How To Get Rich is an invaluable guide to 'the surprisingly simple art of collecting money which already has your name on it'.

Felix Dennis was imprisoned in 1971 as co-editor of OZ magazine. After his acquittal on appeal, he founded his own magazine publishing company in 1973 and made millions with the sale of Personal Computer World and MacUser in the mid-eighties. Today, Dennis Publishing remains a privately owned company with headquarters in London and New York City. Titles include The Week, Auto Express, Computer Shopper and Maxim. The annual Sunday Times Rich List estimates that Felix Dennis is the 65th richest individual in the UK. Following a life-threatening illness, his first collection of poetry, A Glass Half Full, was published in 2002. Two further collections followed in 2004 and 2006, Lone Wolf and When Jack Sued Jill. His other interests include planting trees and he divides his time between homes in Warwickshire, London, New York, Connecticut and the Caribbean island of Mustique.

How to Get Rich
How to Get Rich
Felix Dennis
Paperback
Currently unavailable. We dont know when or if this item will be back in stock
https://www.whsmith.co.uk/products/how-to-get-rich/felix-dennis/paperback/9780091921668.html N/A
GBP