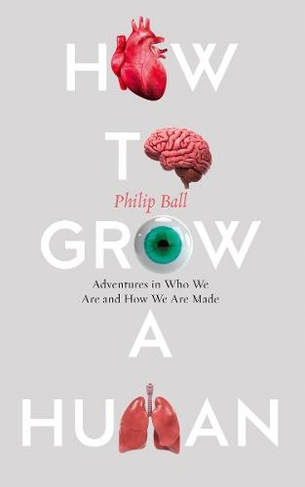 How to Grow a Human: Adventures in Who We are and How We are Made

By Philip Ball (Author)
Hardback
https://www.whsmith.co.uk/products/how-to-grow-a-human-adventures-in-who-we-are-and-how-we-are-made/philip-ball/hardback/9780008331771-12-000.html £16.00 rrp £20.00 Save £4.00 (20%)
GBP
Availability
In Stock
Free Delivery Available When You Spend £25 Or More
Details
Spend £25 On Products To Receive Free Standard Delivery To Your Home Or Free Next Working Day Click And Collect To Store
Share

A cutting-edge examination of what it means to be human and to have a 'self' in the face of new scientific developments in genetic editing, cloning and neural downloading. After seeing his own cells used to grow clumps of new neurons - essentially mini-brains - Philip Ball begins to examine the concepts of identity and consciousness. Delving into humanity's deep evolutionary past to look at how complex creatures like us emerged from single-celled life, he offers a new perspective on how humans think about ourselves. In an age when we are increasingly encouraged to regard the 'self' as an abstract sequence of genetic information, or as a pattern of neural activity that might be 'downloaded' to a computer, he return us to the body - to flesh and blood - and anchors a conception of personhood in this unique and ephemeral mortal coil. How to Build a Human brings us back to ourselves - but in doing so, it challenges old preconceptions and values. It asks us to rethink how we exist in the world.

Philip Ball is widely recognised as a leading communicator of the relationships between science and the wider culture. For example, his book The Music Instinct (2010), a survey of the cognitive understanding of music, became a bestseller and was longlisted for the Samuel Johnson Prize for nonfiction. Philip's most recent book, The Water Kingdom (2016), was selected as a Book of the Year by the Times and the Economist. He received the Editorial Intelligence Comment Award for Best Science Commentator in 2015 and again in 2017.Philip writes regularly on all areas of science in both popular and technical outlets. For many years he was an editor for Nature, to which he still contributes regularly. He has featured on many national and international radio and television programmes, and he is a presenter of the science history series Science Stories on BBC Radio 4.