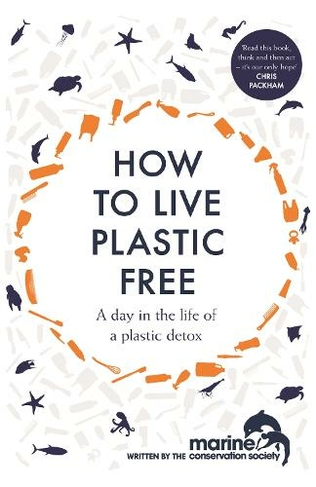 How to Live Plastic Free: a day in the life of a plastic detox

By Luca Bonaccorsi (Author)
Paperback
https://www.whsmith.co.uk/products/how-to-live-plastic-free-a-day-in-the-life-of-a-plastic-detox/luca-bonaccorsi/paperback/9781472259820-12-000.html £9.01 rrp £10.99 Save £1.98 (18%)
GBP
Availability
In Stock
Free Delivery Available When You Spend £25 Or More
Details
Spend £25 on eligible products to receive free standard delivery to home or free next working day click and collect to store
Share

'Read this book, think and then act - it's our only hope.' Chris Packham, MCS Ocean Ambassador Thank you for choosing this book - it shows that you care about the future of our planet. Whether you decide to go plastic free for an hour, a day or a year, this book will equip you with little steps we can each take to make a big difference. Let's turn the tide on plastic now - our oceans will thank you for it. Choking. Starving. Poisoning. This is what plastic litter is doing to marine life. Our oceans are, quite simply, facing environmental disaster. Yet by taking some simple steps and making a few changes to your daily routine, you can help to change this. How to Live Plastic Free will teach you everything you need to know about reducing your plastic usage on a daily basis. The chapters start with a typical morning routine and take you through your day, giving you tips and practical advice for removing unnecessary plastic at every possible opportunity. From the moment you wake up to the time you go to bed, you will learn how easy it can be to use plastic-free cosmetics, how to have plastic-free mealtimes, how to change your shopping habits and how to consider your use of plastic items at work. These simple, practical methods will show that small changes to your lifestyle can make a huge change to the future of our planet.

Luca Bonaccorsi (Author) Luca Bonaccorsi (author) is a journalist, campaigner, economist and environmentalist with over twenty years of international experience. Luca has investigated environmental crimes and disasters in various areas of the world such as Afghanistan, Laos, the Gulf of Thailand, the Gulf of Mexico, South Africa, Lebanon and Italy. He has edited national publications, hosted radio and TV programs. He was Director of Engagement and Communications at the Marine Conservation Society until 2018. Richard Harrington (author) is a marine biologist, passionate about rocky seashores and shallow seas. He has previously worked as a warden on the stunning St Mary's Island, and worked with young people and volunteers for the RSPB. Richard writes for Coast magazine, and was Head of Communications at the Marine Conservation Society until 2019. Clare Fischer (author) is a former BBC broadcaster, who spent almost twenty years presenting, producing and reporting for local radio. Trained at the London College of Printing, she joined the BBC via local newspapers and commercial radio. She presented across the day including Breakfast, Mid-Morning, Afternoon and Drivetime shows. She is currently Editor at the Marine Conservation Society.Marine Conservation Society (Author) The Marine Conservation Society is the UK's leading marine charity. We grew from the hard work and forward-thinking of a number of people who, in the 1970s, could see the harm being wreaked on our marine environment. We started out as the Underwater Conservation Society and became the Marine Conservation Society in 1983, led by marine scientists with a network of dedicated volunteer supporters. Our role is to educate and inspire people to change their habits, opinions and preconceptions to help preserve our oceans for generations to come. We've treated our seas with too little respect for too long - too many fish have been taken out, too much rubbish put in. Now our seas are paying the price for the years of neglect and unrestricted damaging activities, with rising levels of pollution and species in decline. Our work has resulted in the creation of marine protected areas around the UK, plastic carrier-bag charges to reduce litter and supermarkets being more aware of the need to stock sustainable seafood. We've made sure that more people than ever know the dangers of marine litter, especially plastic litter. You can support our work - www.mcsuk.org.