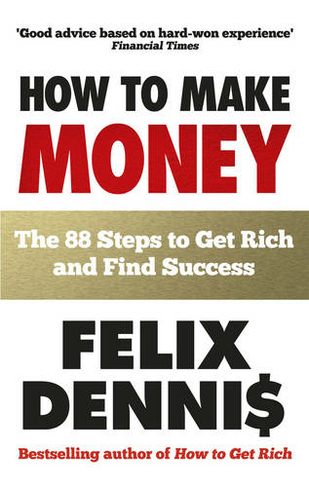 How to Make Money: The 88 Steps to Get Rich and Find Success

Felix Dennis is one of Britain's wealthiest self-made entrepreneurs with an estimated fortune of GBP500 million. And he didn't get there simply by reading about how to get rich. He went out and did it. Appreciating that those intent on becoming rich will not have the time or inclination to read page upon page of guidance and advice on the subject, Felix Dennis has reduced his own business wisdom to 88 tenets of wealth-generation, all written in his inimitable style. How to Make Money is for those determined to get rich, for those who will not confuse reading with doing, for those who seek the narrow road. (First published in hardback as 88 The Narrow Road.)

Felix Dennis is a poet, a publisher and a planter of trees. Having left home at 15, he found himself living as a poverty-stricken musician in a London bedsit. Without a penny of capital and lacking any business experience whatsoever, he created a publishing and digital media empire which today operates on four continents. For many years the Sunday Times Rich List has ranked him in the Top 100 of Britain's wealthiest individuals. He is the author of numerous books, including the international bestseller How to Get Rich, and has also written five books of highly-praised verse, all of which are still in print. His poetry has been performed by the Royal Shakespeare Company on both sides of the Atlantic. His sixth book of verse, Tales From The Woods, will be published by Ebury Press in 2010.Other interests include commissioning bronze sculpture, breeding rare pigs (and occasionally eating them), drinking French wine, collecting first edition books and avoiding business meetings. His greatest ambition is to complete the planting of a large native broadleaf forest in the heart of England. He has homes in Soho, Stratford-upon-Avon, Manhattan, Connecticut and the Caribbean island of Mustique. His website address is www.felixdennis.com.