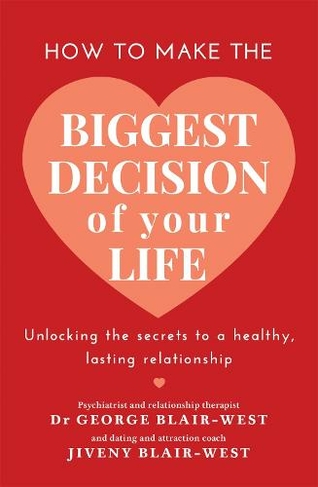 How to Make the Biggest Decision of Your Life

Single, divorced or in a relationship and contemplating marriage? This is THE book you need to create lifelong love. There is no decision that will have a greater impact on our lives than who we choose to give our heart to and share our emotional, parental and financial future with. With divorce rates over 40 per cent in much of the world, it's clear many of us need some help in picking partners. In this informative and entertaining guide, unique father-daughter team, psychiatrist Dr George Blair-West and dating coach Jiveny Blair-West, unlock the science and the secrets to making the biggest decision of your life. You'll learn: How attraction works and how to understand the unconscious forces at play How to create 'true love' that carries us through the tough times What we can learn from arranged marriages Why we need to avoid the nines and tens The six specific qualities important to support a healthy long-term relationship If you're single, this book will give you clarity and the confidence to choose a better partner. If you're in a relationship, it will help you to work out if you should stay or go. Either way, this book will empower you to take charge of your relationship destiny.

Dr George Blair-West specialises in psychiatry, particularly relationship/sex therapy and trauma, in private practice in Brisbane, Australia. His abiding interest is distilling the latest psychotherapeutic research for his clinical work, and sharing it with the greater population. George's writing career began over 25 years ago with a variety of magazine, newspaper and research papers on a range of topics. Needing to lose weight, he then turned his focus to the overlooked research into the psychological forces that prevent weight loss. The bestselling Weight Loss for Food Lovers: Understanding Our Minds and Why We Sabotage Our Weight Loss (translated into Dutch and Chinese) came from his research. A children's book on teaching healthy eating habits followed, and in 2010 he was named one of the 'top 20 most influential obesity experts in the world'.George sees his most important work as helping people make sense of relationships. His writing is heavily influenced by his wife of 30 years, Penny, a clinical psychologist and also a relationship therapist.Jiveny Blair-West, 28, graduated university with a distinction in copywriting. Quickly disheartened by having to work on campaigns she did not believe in, she left Australia and travelled the world for some years before returning to settle in Melbourne where she became a Credentialled Practitioner of Coaching through the Coaching Institute. Then, following in her parents' footsteps, she specialised to become a dating and attraction coach. She started her first blog, about her travels when she was 21 which evolved into her current blog - jiveny.com - with a focus on 'Offline Dating in an Online World'.