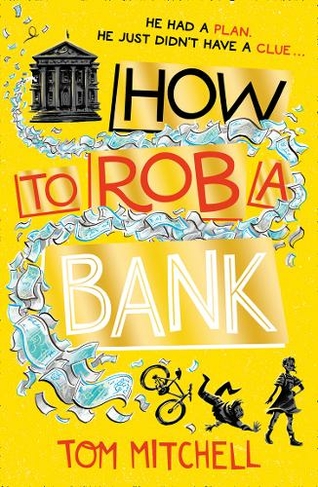 How to Rob a Bank

By Tom Mitchell (Author)
Paperback
https://www.whsmith.co.uk/products/how-to-rob-a-bank/tom-mitchell/paperback/9780008276508-12-000.html £5.94 rrp £6.99 Save £1.05 (15%)
GBP
Availability
In Stock
Free Delivery Available When You Spend £25 Or More
Details
Spend £25 On Products To Receive Free Standard Delivery To Your Home Or Free Next Working Day Click And Collect To Store

A funny, filmic and fast-paced crime-caper by a hilarious new voice in middle-grade fiction, ideal for readers aged 10 and up. Some people rob banks because they're greedy. Others enjoy the adrenalin rush. Me? I robbed a bank because of guilt. Specifically: guilt and a Nepalese scented candle... When fifteen-year-old Dylan accidentally burns down the house of the girl he's trying to impress, he feels that only a bold gesture can make it up to her. A gesture like robbing a bank to pay for her new home. Only an unwanted Saturday job, a tyrannical bank manager, and his unfinished history homework lie between Dylan and the heist of century. And really, what's the worst that could happen? A funny, cinematic, ill-advised comedy-crime adventure perfect for gamers, heist movie fans, and anyone who loves a laugh.

Tom Mitchell is mostly a dad, partly a teacher and sometimes a writer. He grew up in the West Country and settled in London after a brief interlude in the East Midlands. He lives in Kent with his wife, Nicky, and sons, Dylan and Jacob. In 2015 Tom's Twitter account was one of twenty-five worldwide invited to have its tweets showcased in the Twitter Fiction Festival. He has had comedy sketches performed for BBC Radio 4, both nonfiction and fiction pieces published on The Classical and Londonist websites, and was a semi-finalist in the UK's Channel 4-organised search for new writing, The Play's the Thing. HOW TO ROB A BANK was his first novel.