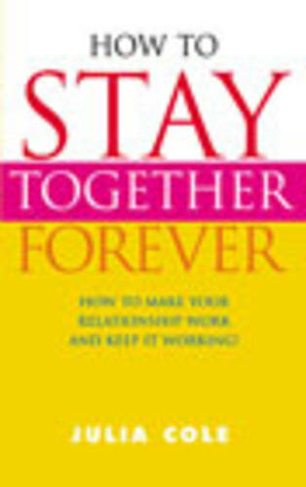 How to Stay Together Forever How to Make Your Relationship Work and Keep it Working!

Statistics tell the truth with shocking clarity: four out of ten marriages in the UK end in divorce. Even sadder is that one in ten divorced men and women wish they had stayed together. Drawing on her experience as a therapist and as a writer on all aspects of sex and relationship problems, Julia Cole looks at the difficulties that commonly beset couples and offers practical ideas for overcoming them. Among the topics she tackles are:--Improving communication--Handling arguments--Finding time for each other outside work and family commitments--Sharing feelings, hopes and dreams--Making time for affection as well as sexWith quizzes and checklists to encourage reader involvement, this book's friendly, accessible style could well be the answer to many people's relationship difficulties.

Julia Cole is a trained couple counsellor and psychosexual therapist. Alongside her own private practice, she is Development Director at the Pennell Initiative for Women's Health, a charity that champions the health rights of women during mid-life and beyond. Currently agony aunt on the Sunday Express magazine, she has contributed to many other publications, including Bella, Marie Claire, Essentials and Femail, and written several books. Her radio and television appearances include Woman's Hour, Newsbeat, Kilroy, Esther and Richard and Judy.