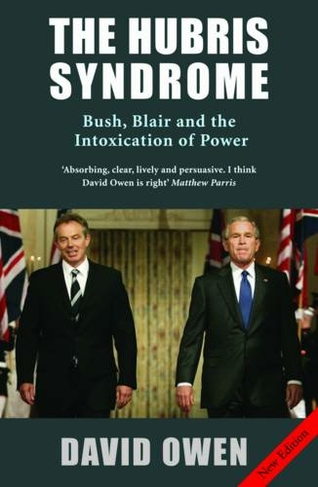 For some politicians and business leaders, power can become an intoxicating drug, and can affect their actions and decision-making in a most serious way. The ancient Greeks called it hubris, and identified arrogance and contempt for others' opinions as classic traits. They also took comfort in the knowledge that the Gods would punish the guilty ones--nemesis. In this revised edition, David Owen has drawn on new material he has written in Brain and other medical journals. He has also drawn on published memoirs of the main players in the Iraq War and on evidence given to the Iraq Inquiry. All this reinforces his earlier assertion that George W. Bush and Tony Blair developed hubris syndrome during their terms in office. From their behavior, beliefs, and governing style, Owen has analyzed the two leaders, with particular reference to the Iraq War, to show that their handling of the war was a litany of hubristic incompetence. During Blair's premiership, David Owen had several meetings and conversations with him that afforded a unique insight into his modus operandi. In this book, Owen presents a devastating critique of how Blair and Bush manipulated intelligence, ignored informed advice, and failed to plan for the aftermath of regime change in Iraq. Their messianic manner, excessive confidence, and belief that they would be vindicated by a "higher court," brought chaos to Iraq and resulted in hundreds of thousands of civilian casualties.

David Owen served as Foreign Secretary under James Callaghan from 1977 until 1979, and co-founded and went on to lead the Social Democratic Party. He is the author of Balkan Odyssey, The Hubris Syndrome, In Sickness and In Power, and Time to Declare.