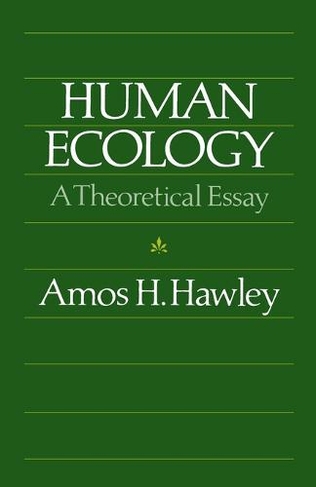 Human Ecology: A Theoretical Essay, by Amos Hawley, presents for the first time a unified theory of human ecology by a scholar whose name is virtually synonymous with the discipline. Focused on the interaction between society and environment, human ecology is an attempt to deal holistically with the phenomenon of human organization. Beginning in the first quarter of the century, sociologists such as Park, Burgess, and McKenzie developed the study of human ecology to account for the dynamics of change in American cities. Over time, theorists have reached beyond the boundaries of sociology, drawing on the findings of economics, political science, anthropology, and bioecology, to understand the relationship of human beings to their environment. Hawley has successfully integrated the scattered theses of this wide-ranging discipline into a schematic whole. The early human ecologists seized on the analogy of plant communities as a way of understanding urban communities. Hawley here maintains that the most important contribution to human ecology of the lexicons of plant and animal ecologies is the perspective of collective life as an adaptive process consisting in an interaction of environment, population, and organization. From the adaptive profess, he argues, emerges the ecosystem, a concept that serves as a common denominator for bioecology and human ecology. Hawley has codified the theory of human ecology by a set of deductive hypotheses that establish its claims to coherence and comprehensiveness. His model charts a synthesis of ecological concepts ranging from adaptation and equilibrium through growth in temporal and spatial dimensions to convergence and openness. The essay underscores the critical importance of transportation and communication technology to the shaping of the human ecological system. Human Ecology brings concision and elegance to this holistic perspective and will serve as a point of reference and orientation for anyone interested in the powers and scope of the ecological approach. Illustrations

Amos H. Hawley is Kenan Professor Emeritus in Sociology at the University of North Carolina, Chapel Hill. He is the author of Urban Society: An Ecological Approach and the editor of Societal Growth: Processes and Implications and Roderick D. McKenzie on Human Ecology, the latter published by the University of Chicago Press.