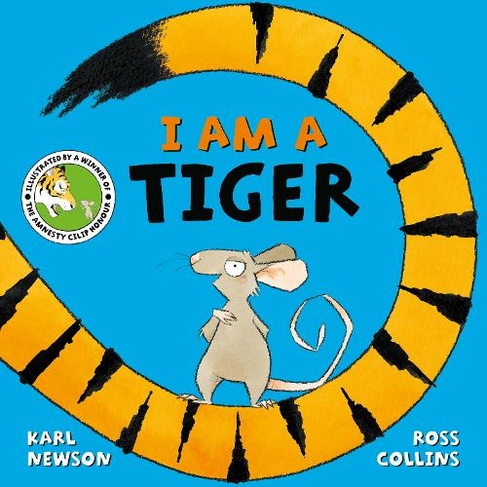 I am a Tiger

A hilarious and original story about a little mouse with big ideas! The bold little mouse declares "I am a tiger." and manages to convince a raccoon, a fox, a snake and a bird not only that this is true, but that they are not what they think they are. When a real tiger turns up, can the persuasive and fearless little rodent manage to persuade the tiger that he is a mouse! With vibrant artwork by award-winning illustrator Ross Collins, and delightful characters created by rising star Karl Newson, I am a Tiger is a story that will amuse and entertain everyone, from the smallest mouse to the biggest tiger.

Ross Collins was born in Glasgow, Scotland. Growing up he was particularly fond of drawing the bionic man and precariously swinging backwards on chairs. He went on to study illustration at the Glasgow School of Art, graduating in 1994 and in the same year he won the Macmillan Children's Book Prize for the The Sea Hole. Since then he has gone on to illustrate over 100 books and has written several too. His picture book The Elephantom was shortlisted for the Kate Greenaway Medal and has now been staged at London's Royal National Theatre by the creative team behind Warhorse and in 2016 This Zoo is Not for You won the inaugural Amnesty CILIP Honour. When Ross is not creating children's books he enjoys working on character development for animation studios such as Laika and Disney. He lives with his partner Jacqui, his young son, and his dog Hugo, in Scotland.Karl Newson is an up and coming children's book writer and illustrator, living in London. He enjoys writing stories on a variety of topics, from quiet bedtime reads, to wild, imaginative, wondrous tales. The sometimes writer of short poems, Karl enjoys reading adventure stories, watching science fiction films, and listening to music from the 1960s. He loves to gaze at the stars and wonder why . . . and always gets his best ideas just before bed. Karl is the author of Here Comes the Sun, Fum, Little Grey's Birthday Surprise and A Bear is a Bear. I am a Tiger is his first picture book with Macmillan.