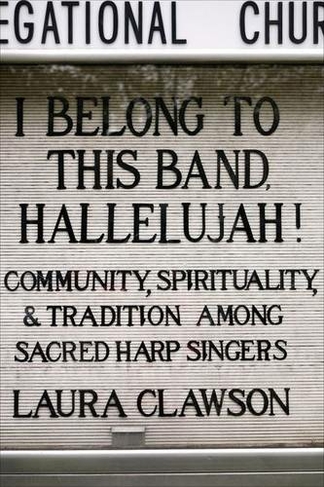 I Belong to This Band, Hallelujah! Community, Spirituality, and Tradition Among Sacred Harp Singers

The Sacred Harp choral singing tradition originated in the American South in the mid-nineteenth century, spread widely across the country, and continues to thrive today. Sacred Harp isn't performed but participated in, ideally in large gatherings where, as the a cappella singers face each other around a hollow square, the massed voices take on a moving and almost physical power. "I Belong to This Band, Hallelujah!" is a vivid portrait of several Sacred Harp groups and an insightful exploration of how they manage to maintain a sense of community despite their members' often profound differences. Laura Clawson's research took her to Alabama and Georgia, to Chicago and Minneapolis, and to Hollywood for a Sacred Harp performance at the Academy Awards, a potent symbol of the conflicting forces at play in the twenty-first-century incarnation of this old genre. Clawson finds that in order for Sacred Harp singers to maintain the bond forged by their love of music, they must grapple with a host of difficult issues, including how to maintain the authenticity of their tradition and how to carefully negotiate the tensions created by their disparate cultural, religious, and political beliefs.

Laura Clawson is a senior writer at Working America, the community affiliate of the AFL-CIO.