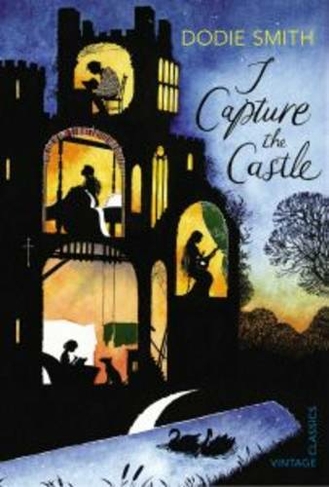 I Capture the Castle

By Dodie Smith (Author)
Paperback
https://www.whsmith.co.uk/products/i-capture-the-castle/dodie-smith/paperback/9780099572886-12-000.html £6.55 rrp £7.99 Save £1.44 (18%)
GBP
Availability
In Stock
Free Delivery Available When You Spend £25 Or More
Details
Spend £25 On Products To Receive Free Standard Delivery To Your Home Or Free Next Working Day Click And Collect To Store

"I write this sitting in the kitchen sink. That is, my feet are in it; the rest of me is on the draining-board, which I have padded with our dog's blanket and the tea-cosy". This is the diary of Cassandra Mortmain, which tells of her extraordinary family and their crumbling castle home. Cassandra's father was once a famous writer, but now he mainly reads detective novels while his family slide into genteel poverty. Her sister Rose is bored and beautiful, and desperate to marry riches. Their step-mother Topaz has habit of striding through the countryside wearing only her wellington boots. But all their lives will be soon be transformed by the arrival of new neighbours from America, and Cassandra finds herself falling in love...

Dodie Smith was born in Manchester in 1896. Aged 17 she set off for London, determined to become an actress, but she struggled to find work, living off baked beans in freezing hostels. While working at the famous Heals department store, Dodie turned to writing plays instead, and her first was an overnight sensation - the newspapers excitedly declared 'Shopgirl Turns Playwright!'. During the war she moved to Hollywood with her husband, and it was there, spurned on by regret and homesickness for the English countryside she'd left behind, that Dodie began writing I Capture the Castle. When a friend gave Dodie a dalmatian puppy (presented in a hat box!) this began a life-long love of the spotty dogs. Dodie's well-loved novel 101 Dalmatians was inspired by her experiences of raising fifteen puppies. She lived in a ramshackle cottage with her husband and many other animals until her death in 1990, aged 94.