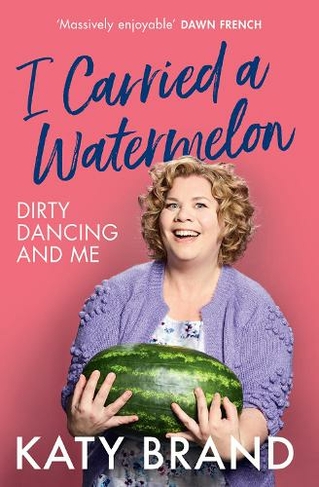 I Carried a Watermelon: Dirty Dancing and Me

By Katy Brand (Author)
Hardback
https://www.whsmith.co.uk/products/i-carried-a-watermelon-dirty-dancing-and-me/katy-brand/hardback/9780008352783-12-000.html £10.65 rrp £12.99 Save £2.34 (18%)
GBP
Availability
In Stock
Free Delivery Available When You Spend £25 Or More
Details
Spend £25 On Products To Receive Free Standard Delivery To Your Home Or Free Next Working Day Click And Collect To Store

'Massively enjoyable.' Dawn French I Carried a Watermelon is a love story to Dirty Dancing. A warm, witty and accessible look at how Katy Brand's life-long obsession with the film has influenced her own attitudes to sex, love, romance, rights and responsibilities. It explores the legacy of the film, from pushing women's stories to the forefront of commercial cinema, to its 'Gold Standard' depiction of abortion according to leading pro-choice campaigners, and its fresh and powerful take on the classic 'coming of age' story told from a naive but idealistic 17-year-old girl's point of view. Part memoir based on a personal obsession, part homage to a monster hit and a work of genius, Katy will explore her own memories and experiences, and talk to other fans of the film, to examine its legacy as a piece of filmmaking with a social agenda that many miss on first viewing. One of the most celebrated and viewed films ever made is about to have the time of its life.

Katy Brand is an award-winning writer, comedian and actor. After starting to write and perform comedy as a student, she spent a few years working in TV production. In 2005 Katy went back to the stage, taking her debut comedy show 'Celebrities are Gods' to the Edinburgh Fringe, which later became her award-winning ITV sketch show, Katy Brand's Big Ass Show. She published her first novel, Brenda Monk is Funny in 2014, went back to the Fringe in 2016 with her critically-acclaimed live show, 'I Was a Teenage Christian' and wrote a play, 3Women in 2018. Her first non-fiction book H was published in 2019, and in 2020 she made her West End debut in 'Everybody's Talking About Jamie!' It may be time for a sit down.