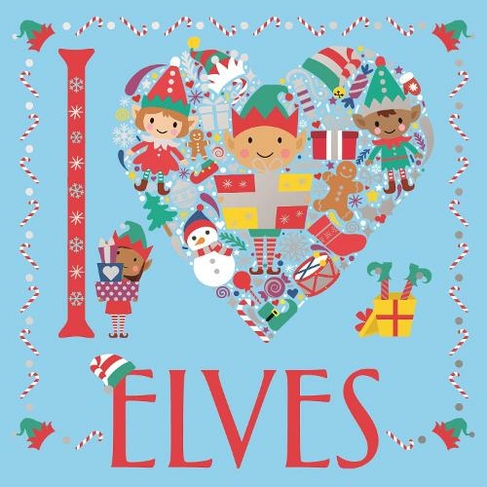 Settle down by the fire and discover Santa's little helpers in the North Pole. With their shiny boots, stripy tights and hats with jingling bells, children and adults alike can bring these energetic elves to life with colour. Part of the I Heart series with a pretty foiled cover, this book is a perfect stocking filler.

Jessie Eckel (Author) Jessie Eckel completed an art foundation course in Nottingham and won the Ida Berry Young Artist of the Year Award at the end of the course, before moving to London to take a First Class degree in Illustration. Her degree course was so successful that she received immediate commissions from prestigious organisations like Greenpeace, Habitat and Wagamama. She now works full time as an illustrator, producing artwork for stationery items homewares and publishing.She is the illustrator of Doodle Dolls and has illustrated a series of colouring books for Buster including I Heart Unicorns.Emily Twomey (Author) Emily Twomey lives and works as an illustrator in Bristol. Since graduating with a first class degree in Illustration, she has worked with a wide range of clients including United Airlines, Scholastic, Buster Books and Oxford University Press. She has illustrated two picture books, the first of which (The Loon on the Moon) won the Dundee Picture Book Award 2012. She is inspired by the 'Golden Age' of fairytales and artists such as Edward Gorey and Aubrey Beardsley. A wide selection of Emily's work can be viewed on her website www.emilygolden.co.uk.Lizzie Preston (Author) Birmingham based Lizzie Preston is a versatile designer, illustrator and all-round creative.Lizzie loves anything from doodles to laser cuts, graphic to hand drawn and has a real passion for typography and intricate illustration.