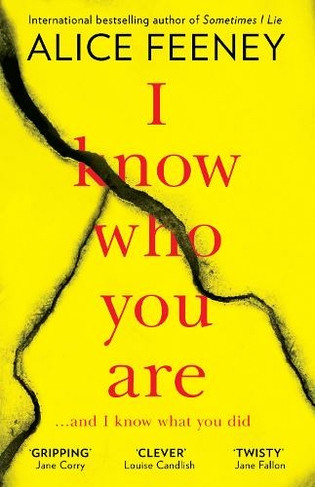 I Know Who You Are

By Alice Feeney (Author)
Paperback
£7.37 rrp £8.99 Save £1.62 (18%)
GBP
Availability
In Stock
Free Delivery Available When You Spend £15 Or More
Details
Spend £15 On Products To Receive Free Standard Delivery To Your Home

'What a ride, I loved this book and the brilliant Hitchcockian twist!' Sarah Michelle Gellar 'Twisty and gripping' Jane Fallon 'You will NEVER guess the ending of this one!' Louise Candlish 'A fiendishly well-plotted, deliciously dark and twisting read' Lucy Foley 'A twisty, gripping thriller' The Sunday Times 'Expect twists a plenty in this clever and tense thriller' Red Magazine The highly anticipated new novel from the international bestselling author of Sometimes I Lie, Alice Feeney's new novel is her most twisted and nerve-wracking thriller yet. Aimee Sinclair: the actress everyone thinks they know but can't remember where from. But I know exactly who you are. I know what you've done. And I am watching you. When Aimee comes home and discovers her husband is missing, she doesn't seem to know what to do or how to act. The police think she's hiding something and they're right, she is - but perhaps not what they thought. Aimee has a secret she's never shared, and yet, she suspects that someone knows. As she struggles to keep her career and sanity intact, her past comes back to haunt her in ways more dangerous than she could have ever imagined. I Know Who You Are will leave your heart pounding and your pulse racing. This is the most twisted thriller you'll read all year.

Alice Feeney is a writer and journalist. She spent fifteen years at the BBC where she worked as a reporter, news editor, arts and entertainment producer and One O'clock news producer. Alice has lived in London and Sydney and has now settled in the Surrey countryside, where she lives with her husband and dog. Her debut novel, Sometimes I Lie, was a New York Times and international bestseller. The book has been sold in over twenty countries and is being made into a TV series by a major film studio. I Know Who You Are is her second novel.