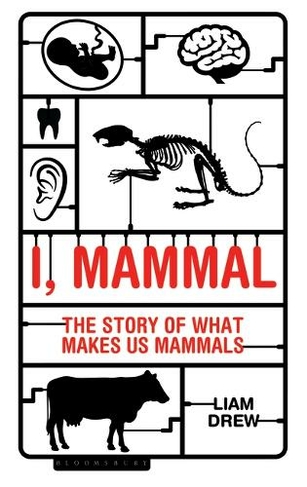 I, Mammal: The Story of What Makes Us Mammals

Humans are mammals. Most of us appreciate that at some level. But what does it mean for us to have more in common with a horse and an elephant than we do with a parrot, snake or frog? After a misdirected football left new father Liam Drew clutching a uniquely mammalian part of his anatomy, he decided to find out more. Considering himself as a mammal first and a human second, Liam delves into ancient biological history to understand what it means to be mammalian. In his humorous and engaging style, Liam explores the different characteristics that distinguish mammals from other types of animals. He charts the evolution of milk, warm blood and burgeoning brains, and examines the emergence of sophisticated teeth, exquisite ears, and elaborate reproductive biology, plus a host of other mammalian innovations. Entwined are tales of zoological peculiarities and reflections on how being a mammal has shaped the author's life. I, Mammal is a history of mammals and their ancestors and of how science came to grasp mammalian evolution. And in celebrating our mammalian-ness, Liam Drew binds us a little more tightly to the five and a half thousand other species of mammal on this planet and reveals the deep roots of many traits humans hold dear. 14 black and white illustrations

Liam Drew is a writer, former neurobiologist and mammal. He has a PhD in sensory biology from University College London, and spent twelve years researching the neural and genetic basis of schizophrenia, the biology of pain and the birth of new neurons in the adult mammalian brain at Columbia University, New York and at UCL. His writing has appeared in Nature, New Scientist, Slate and the Guardian. He is director of NeuWrite London, a London subsidiary of 'NeuWrite: a collaborative working group for scientists, writers, and those in between'. He lives in Kent with his wife and two daughters.@liamjdrew