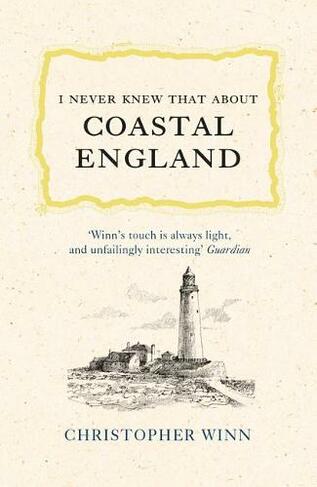 I Never Knew That About Coastal England

By Christopher Winn (Author)
Hardback
https://www.whsmith.co.uk/products/i-never-knew-that-about-coastal-england/christopher-winn/hardback/9781785039539-12-000.html £10.65 rrp £12.99 Save £2.34 (18%)
GBP
Availability
In Stock
Free Delivery Available When You Spend £25 Or More
Details
Spend £25 on eligible products to receive free standard delivery to home or free next working day click and collect to store
Share

We all love to be beside the seaside! Be it the crunch of the sand beneath your feet, or the promise of an unexplored rock pool that draws you to the sea, prepare to be whisked away by bestselling author Christopher Winn as you delve into the charming tales of England's coastline. Divided into eighteen chapters - one for each of the coastal counties in the UK - this book will entertain and illuminate, by casting new light on the many points of intrigue to be explored along 3000 miles of spectacularly diverse and historically rich English coast. Illustrated with beautiful black-and-white line drawings, by Mai Osawa, this book makes the perfect companion for any seaside outing. You'll find yourself exclaiming again and again - I never knew that!

Christopher Winn's first book was the bestselling I Never Knew That About England. Volumes on Ireland, Scotland, Wales and London followed as well as books on the English, Scottish and Irish, alongside an illustrated edition of I Never Knew That About England and London. A freelance writer and collector of trivia for over 20 years, he has worked with Terry Wogan and Jonathan Ross and sets quiz questions for television as well as for the Daily Mail and the Daily Telegraph. He was also the Associate Producer for a TV series by ITV on Great Britain. He is married to artist Mai Osawa, who illustrates all the books in the series. His website is http://www.i-never-knew-that.com.