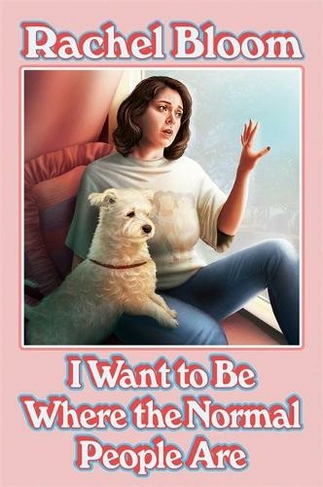 I Want to Be Where the Normal People Are: The perfect Christmas gift for Crazy Ex-Girlfriend fans

'One of the funniest books of the year' - Guardian A collection of hilarious personal essays, poems and even amusement park maps on the subjects of insecurity, fame, anxiety, and much more from the charming and wickedly funny creator of Crazy Ex-Girlfriend. "It's nice to know someone as talented as Rachel is also pretty weird. If you're like me and love Rachel Bloom, this hilarious, personal book will make you love her even more." - Mindy Kaling "Rachel is one of the funniest, bravest people of our generation and this book blew me away." - Amy Schumer Rachel Bloom has felt abnormal and out of place her whole life. In this exploration of what she thinks makes her 'different', she's come to realise that a lot of people also feel this way; even people who she otherwise thought were 'normal'. In a collection of laugh-out-loud funny essays, all told in the unique voice (sometimes singing voice) that made her a star, Rachel writes about everything from her love of Disney, OCD and depression, weirdness, and female friendships to the story of how she didn't poop in the toilet until she was four years old. It's a hilarious, smart, and infinitely relatable collection (except for the pooping thing). Readers love I Want to Be Where the Normal People Are 'I adore Crazy Ex-Girlfriend and this book was exactly what I needed it to be. Would highly recommend.' 5* 'Rachel's voice is loud and clear from the first lines of the book. I've been missing it since Crazy Ex-Girlfriend . . . this time she's talking right to me, in my head, and it is like being part of this newfound Friendtopia.' 5* 'Heartfelt. Honest. Genuine. And funny as hell . . . Rachel writes about the things that could have broken her, but didn't, in a very funny and raw way, and she doesn't hold back.' 5* 'Crazy Ex-Girlfriend is a hilarious and honest show which does not hold back when confronting the truth of sex, love, mental illness and life. This same comedic and chaotic energy is channelled in Bloom's wonderful book which I would highly recommend, whether you are a previous fan of hers or not.' 5*

Rachel Bloom is a comedian, actress, writer, and singer based in Los Angeles. She created, co-executive produced, and starred in the TV series Crazy Ex-Girlfriend on the CW Network and earned both a Golden Globe and Critics Choice award for her performance. She has been named a comic to watch by Cosmopolitan, Time Out LA and Backstage Magazine, and has been featured in Variety and the LA Times. Together with Adam Schlesinger, she'll be writing the music and lyrics for "The Nanny" on Broadway.