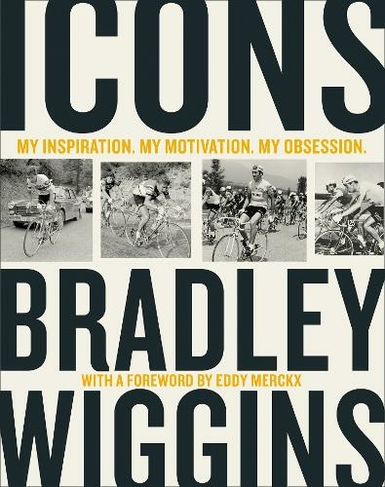 Icons: My Inspiration. My Motivation. My Obsession.

By Bradley Wiggins (Author)
Hardback
https://www.whsmith.co.uk/products/icons-my-inspiration-my-motivation-my-obsession/bradley-wiggins/hardback/9780008301743-12-000.html £20.00 rrp £25.00 Save £5.00 (20%)
GBP
Availability
In Stock
Free Delivery Available When You Spend £25 Or More
Details
Spend £25 On Eligible Products To Recieve Free Standard Delivery To You Home Or Free Next Working Day Click And Collect To Store
Share

With a foreword by Eddy Merckx The world of professional cycling is fraught with fierce competition, fervent dedication and unerring ambition, and only a handful of competitors reach iconic status. Among them is Sir Bradley Wiggins - a man uniquely placed to reflect on the history of this remarkable sport and its unforgettable titans. In Icons, Wiggins takes the reader on an extraordinarily intimate journey through the sport, presenting key pieces from his never-before-seen collection of memorabilia. Over the course of his illustrious career, he amassed hundreds of items - often gifts from its greatest and most controversial figures. Each reflects an icon, a race or a moment that fundamentally influenced Wiggins on both a personal and professional level. By exploring the lives and achievements of 21 of the sport's key figures - among them Fausto Coppi, Jacques Anquetil, Miguel Indurain and Tom Simpson - Wiggins sheds new light on what professional cycling demands of its best competitors. Icons lauds their triumphs, elucidates their demons and sheds light on the philosophy and psychology that comprise the unique mindset of a cycling champion.

Sir Bradley Wiggins grew up in Kilburn in London. He won the World Junior Pursuit title before going on to win eight Olympic medals including five golds spanning five games, and seven World Track Championship titles. In 2012 he became the first Briton to win the Tour de France. He was awarded the OBE in the 2005 New Year's honours list and the CBE in 2009, before being knighted in 2012. He currently lives in the north-west of England with his wife, Cath, and their two children, Ben and Isabella. Herbie Sykes is a British sports journalist and writer specializing in the history of road bicycle racing. His fourth book, The Race Against the Stasi, won the Cycling Book of the Year at the Cross British Sports Book Awards, and was nominated in the outstanding general sports writing category. In addition, it was among the Observer sports books of the year.