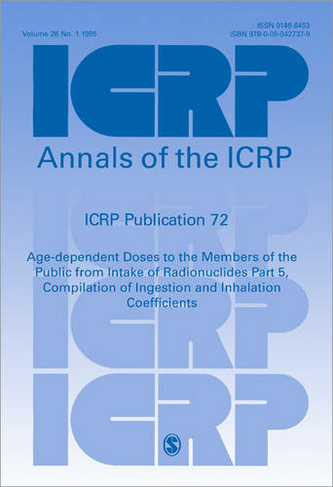 ICRP Publication 72: Age-dependent Doses to the Members of the Public from Intake of Radionuclides Part 5, Compilation of Ingestion and Inhalation Coefficients (Annals of the ICRP)

The purpose of ICRP 72 is to summarise data on age dependent committed effective dose coefficients for members of the public from intakes by ingestion and inhalation of radioisotopes of the 91 elements described in ICRP Publications 56, 67, 68, 69 and 71. These dose coefficients have been adopted in the International Atomic Energy Agency in their publication on International Basic Safety Standards for Protection against Ionising Radiation, and in the Euratom Directive. The report does not give committed equivalent dose coefficients to tissues and organs. The report will be useful to operational health physicists and to regulatory and advisory bodies responsible for radiation protection.