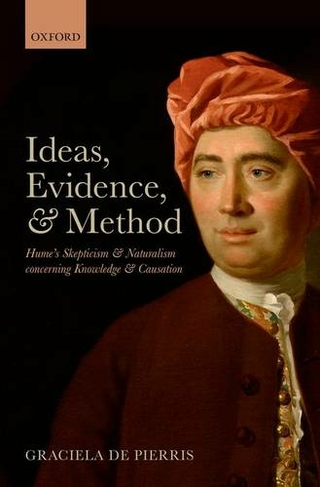 Graciela De Pierris presents a novel interpretation of the relationship between skepticism and naturalism in Hume's epistemology, and a new appraisal of Hume's place within early modern thought. Whereas a dominant trend in recent Hume scholarship maintains that there are no skeptical arguments concerning causation and induction in Book I, Part III of the Treatise, Graciela De Pierris presents a detailed reading of the skeptical argument she finds there and how this argument initiates a train of skeptical reasoning that begins in Part III and culminates in Part IV. This reasoning is framed by Hume's version of the modern theory of ideas developed by Descartes and Locke. The skeptical implications of this theory, however, do not arise, as in traditional interpretations of Hume's skepticism, from the 'veil of perception.' They arise from Hume's elaboration of a presentational-phenomenological model of ultimate evidence, according to which there is always a justificatory gap between what is or has been immediately presented to the mind and any ideas that go beyond it. This happens, paradigmatically, in the causal-inductive inference, and, as De Pierris argues, in demonstrative inference as well. Yet, in spite of his firm commitment to radical skepticism, Hume also accepts the naturalistic standpoint of science and common life, and he does so, on the novel interpretation presented here, because of an equally firm commitment to Newtonian science in general and the Newtonian inductive method in particular. Hume defends the Newtonian method (against the mechanical philosophy) while simultaneously rejecting all attempts (including those of the Newtonians) to find a place for the supernatural within our understanding of nature.

Graciela De Pierris was born in Argentina and received her PhD in Philosophy from the University of California at Berkeley. She has held teaching positions at the University of Illinois at Chicago and Indiana University, Bloomington. She is presently Associate Professor of Philosophy at Stanford University. She has published numerous articles on Hume and Kant, and their relationship with Descartes, Locke, Leibniz, and Newton, and has also published on skepticism andon naturalism. Her articles have appeared in both English and Spanish language journals: Synthese; Hume Studies; Stanford Encyclopedia of Philosophy; Philosophy and Phenomenological Research; Journal of the History of Philosophy; Canadian Journal of Philosophy; Nous; Pacific Philosophical Quarterly;Analisis Filosofico; Manuscrito; Dialogos; Revista Latinoamericana de Filosofia; and others.