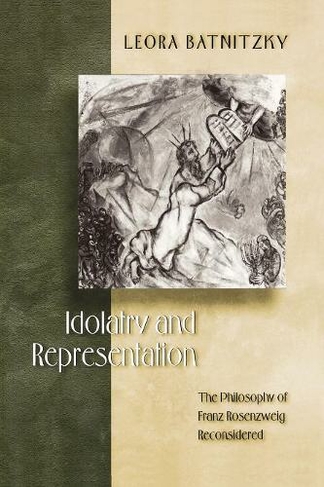 Idolatry and Representation: The Philosophy of Franz Rosenzweig Reconsidered

Although Franz Rosenzweig is arguably the most important Jewish philosopher of the twentieth century, his thought remains little understood. Here, Leora Batnitzky argues that Rosenzweig's redirection of German-Jewish ethical monotheism anticipates and challenges contemporary trends in religious studies, ethics, philosophy, anthropology, theology, and biblical studies. This text, which captures the hermeneutical movement of Rosenzweig's corpus, is the first to consider the full import of the cultural criticism articulated in his writings on the modern meanings of art, language, ethics, and national identity. In the process, the book solves significant conundrums about Rosenzweig's relation to German idealism, to other major Jewish thinkers, to Jewish political life, and to Christianity, and brings Rosenzweig into conversation with key contemporary thinkers. Drawing on Rosenzweig's view that Judaism's ban on idolatry is the crucial intellectual and spiritual resource available to respond to the social implications of human finitude, Batnitzky interrogates idolatry as a modern possibility. Her analysis speaks not only to the question of Judaism's relationship to modernity (and vice versa), but also to the generic question of the present's relationship to the past--a subject of great importance to anyone contemplating the modern statuses of religious tradition, reason, science, and historical inquiry. By way of Rosenzweig, Batnitzky argues that contemporary philosophers and ethicists must relearn their approaches to religious traditions and texts to address today's central ethical problems.

Leora Batnitzky is Assistant Professor of Religion at Princeton University.