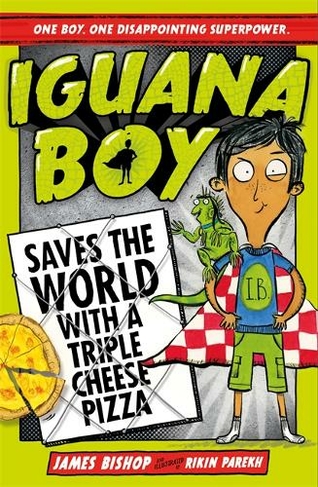 One boy. One disappointing superpower. Can Dylan tame a bunch of hyper iguanas and come up with a masterful plan to save the WORLD? Yeah, probably ... but he's going to need a MASSIVE cheese pizza. Perfect for fans of Tom Gates, Future Ratboy and My Brother is a Superhero. Dylan has wanted a superpower for as long as he can remember, especially since his brother and sister have got really cool ones. But when his wish finally comes true, Dylan is MIGHTILY disappointed. For Dylan has become ... Iguana Boy. He can talk to Iguanas ... RUBBISH! And when supervillain Celina Shufflebottom kidnaps all the superheroes in London, Dylan must work out how to use his new team of chatty iguanas to save the day. He's going to have to think outside the box, (the pizza box), if he's going to become the hero he's always dreamed of. If he's going to make Iguana Boy cool. 'HILARIOUS and so silly - superheroes, reptiles and pizza ... AWESOME, why didn't I think of that?!' Tom Fletcher Black and white line illustrations

James Bishop (Author) James was born in Oxfordshire - he is incredibly proud that after 32 years, he has managed to move one town over from where he was raised (although he does feel homesick). His previous work includes writing credits on Diddy TV and Gigglebiz, as well as "successfully" convincing 90's pop act Hanson to play at his wedding. Well, they didn't actually play, but they sent him on a honeymoon to Jamaica which James thinks is even better. James spends his spare time thinking of inventive ways to engineer more spare time for himself ... so far unsuccessfully.Rikin Parekh (Illustrator) Rikin Parekh is a children's book illustrator based in North West London. He has two art degrees from Camberwell College of Arts and the University of Westminster. His past jobs include working in a primary school and as a film production illustrator on monster movies. Rikin has a vast collection of comic books and comic art and he LOVES eating pizza ... any time, any place! Therefore, you could say Rikin was a match made in pizza heaven for Iguana Boy!