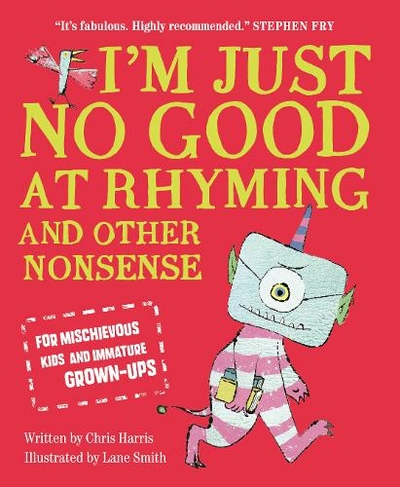 I'm Just No Good At Rhyming: And Other Nonsense for Mischievous Kids and Immature Grown-Ups

"Highly recommended. I think it will make children wriggle with delight" - Stephen Fry If I ever find myself holding a gecko . . . I'll lecko. Forget what you think you know about poetry - this is something totally different. Chris Harris' I'm Just No Good At Rhyming combines wit, wordplay and nonsense with visual and verbal tricks to make you look at the world in a new and wonderfully upside-down way, reminiscent of Spike Milligan. I'm just no good at rhyming. It makes me feel so bad. I'm just no good at rhyming, And that's why I'm so blue. This entirely unique collection of wildly witty words offers a surprise around every corner, from the ongoing rivalry between the author and illustrator (mean poem and cruel portrait included), to the mysteriously misnumbered pages that can only be deciphered by a certain code-cracking verse, to a poem that is 100% genuinely infinite. Meet a balding werewolf, competitive boulders, a birthday piranha, and find out if grown-ups really are better! Why are grown-ups better than kids? 'Cause we got what it takes - We never, ever, ever, ever, ever, make mistaeks! Adding to the fun: Lane Smith, winner of the CILIP Kate Greenaway Medal for There Is a Tribe of Kids, has spectacularly illustrated this extraordinary collection with nearly one hundred pieces of appropriately absurd art. It's a mischievous match made in heaven and the perfect gift for creative kids or immature grown-ups.

Chris Harris is a writer and executive producer for How I Met Your Mother and a writer for The Late Show with David Letterman. His pieces have appeared in The New Yorker, Esquire, ESPN, The New York Times, The Wall Street Journal, and on NPR. He lives in Los Angeles, loves peppermint stick ice cream and, when he's not too full, just-a little-bit-more-peppermint-stick-ice-cream-but-don't-tell-anyone. He's a funny guy, as you can tell from his children's poetry collection I'm Just No Good At Rhyming. In his spare time, he gets older. Lane Smith is the creator of It's a Book, It's a Little Book, Grandpa Green and A Perfect Day, and the illustrator of A House That Once Was by Julie Fogliano. In 2017 he won the CILIP Kate Greenaway Medal for There Is a Tribe of Kids. Lane Smith and his wife, the designer Molly Leach, live in a small town in rural Connecticut, USA.