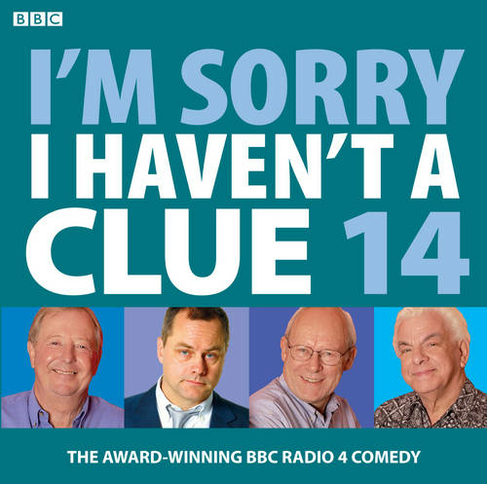 This fourteenth collection of the antidote to panel games finds Jack Dee giving regular panellists Tim Brooke-Taylor, Barry Cryer and Graeme Garden silly things to do along with special guests Jeremy Hardy, Marcus Brigstocke, Rob Brydon and David Mitchell. Highlights include 'Uxbridge English Dictionary', 'One Song to the Tune of Another', 'Sound Charades', 'Swanee Kazoo', 'Texting for Pensioners', 'Whose Duck Are You?' and, of course, 'Mornington Crescent'. Get ready to laugh out loud as the gang indulge in more wonderful wordplay, accompanied by Colin Sell on the piano and the lovely Samantha, who's always ready to score. 'Risky, rude, brilliantly written and superbly performed' - The Judges, Sony Radio Academy Awards. 2 CDs. 2 hrs 36 mins.

I'm Sorry I Haven't A Clue was first broadcast on Radio 4 on Tuesday 11 April 1972, with a pilot edition which had been recorded in November 1971 under a working title of I'm Sorry They're At It Again. The panel consisted of the show's deviser, Graeme Garden, alongside Bill Oddie, Jo Kendall and Tim Brooke-Taylor. From the start, Clue's zany humour delighted listeners. Initial research revealed audience reactions such as 'teams were talented and amusing... an exceptionally fine quiz master - witty, relaxed and a good match for the teams.' One listener, however, complained that he 'hadn't a clue what it was all about' which, given the eventual title of the show, was perhaps an endorsement! The show's many years on air testify to its appeal, which owes much to the wit of the chairman, Humphrey Lyttelton. Humph, as he was affectionately known, was educated at Eton, and he trained at art college before joining the Daily Mail as a cartoonist. An ex-Grenadier Guardsman trumpeter, his reputation as a jazz player was legendary. The regular members of the panel - Tim Brooke-Taylor, Barry Cryer, Graeme Garden and, until his untimely death in December 1996, Willie Rushton - formed a perfect comic quartet. Tim and Graeme previously worked together on I'm Sorry I'll Read That Again, the forerunner of I'm Sorry I Haven't A Clue, whilst Barry and Tim appeared together on radio and television in Hello Cheeky. Their wholehearted enthusiasm for such games as Tag Wrestling, Wuthering Hillocks and Cheddar Gorge ensures constant hilarity on the panel and in the studio audience. Of course, the best-known game of all is Mornington Crescent, whose rules have eluded and baffled listeners for years. Other highlights include the lovely Samantha, and Colin Sell at the piano - who, according to Humph, is about to complete his latest album: 'All he needs is the latest set of prints back from Snappy-Snaps...' Humphrey Lyttelton, broadcaster, musician, presenter and master of the double entendre, died on 25 April 2008. After a long and understandable break, Radio 4's antidote to panel games returned on 15 June 2009 for its 51st series. Stephen Fry, Jack Dee and Rob Brydon took it in turns to keep some kind of order, as they chaired this new series without the much-missed Humph, and later the same year Jack Dee took over as the regular host. The Official Stage Tour also continued in 2009 without Humph, with Jack Dee, Rob Brydon and others sharing the chairman's role. I'm Sorry I Haven't a Clue celebrated its 40th anniversary in 2012.