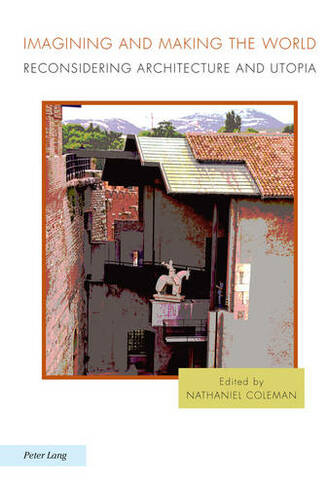 Although the association between architecture and utopia (the relationship between imagining a new world and exploring how its new conditions can best be organized) might appear obvious from within the domain of utopian studies, architects have long attempted to dissociate themselves from utopia. Concentrating on the difficulties writers from both perspectives experience with the topic, this collection interrogates the meta-theoretical problematic for ongoing intellectual work on architecture and utopia. The essays explore divergent manifestations of the play of utopia on architectural imagination, situated within specific historical moments, from the early Renaissance to the present day. The volume closes with an exchange between Nathaniel Coleman, Ruth Levitas, and Lyman Tower Sargent, reflecting on the contributions the essays make to situating architecture and utopia historically and theoretically within utopian studies, and to articulating utopia as a method for inventing and producing better places. Intriguing to architects, planners, urban designers, and others who study and make the built environment, this collection will also be of interest to utopian studies scholars, students, and general readers with a concern for the interrelationships between the built environment and social dreaming.

Nathaniel Coleman is Senior Lecturer in Architecture at Newcastle University, UK, and the author of Utopias and Architecture (2005). He has also contributed chapters to Constructing Place and The Hand and the Soul, and has published articles on utopia and architecture, the history and theory of architecture, and pedagogy in journals such as Architectural Research Quarterly, Interfaces: Image, Texte, Langage, Morus: Utopia e Rinascimento, Cloud-Cuckoo-Land: International Journal of Architectural Theory, and The International Journal of Art and Design Education.