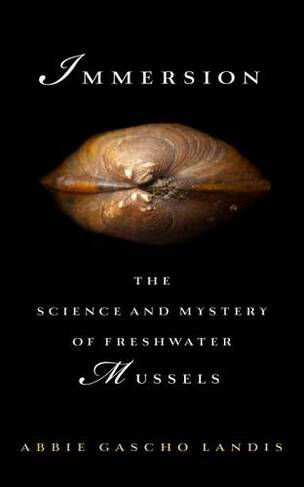 Immersion: The Science and Mystery of Freshwater Mussels

By Abbie Gascho Landis (Author)
Hardback
https://www.whsmith.co.uk/products/immersion-the-science-and-mystery-of-freshwater-mussels/abbie-gascho-landis/hardback/9781610918077-01-000.html £20.69 rrp £22.99 Save £2.30 (10%)
GBP
Availability
Currently unavailable. We don't know when or if this item will be back in stock
Share

In Immersion: The Science and Mystery of Freshwater Mussels, Abbie Gascho Landis brings readers to a hotbed of mussel diversity, the American Southeast, to seek mussels where they eat, procreate, and, too often, perish. Accompanied often by her husband, a mussel scientist, and her young children, she learned to see mussels on the creekbed, to tell a spectaclecase from a pigtoe, and to worry what vanishing mussels, 70 percent of North American species are imperilled, will mean for humans and wildlife alike. In Immersion, Landis shares this journey, travelling from perilous river surveys to dry streambeds and into laboratories where endangered mussels are raised one precious life at a time. Mussels have much to teach us about the health of our watersheds if we step into the creek and take a closer look at their lives. In the tradition of writers like Terry Tempest Williams and Sy Montgomery, Landis gracefully chronicles these untold stories with a veterinarian's careful eye and the curiosity of a naturalist.In turns joyful and sobering, Immersion is an invitation to see rivers from a mussel's perspective, a celebration of the wild lives visible to those who learn to search. 7 illustrations

Abbie Gascho Landis is a writer and veterinarian whose work has been published in Pinchpenny Press, Full Grown People, and Paste Magazine. She has won Duke University's Center for Documentary Studies 2015 Essay Award and an Arthur DeLong Writing Award and was a finalist for the Constance Rooke Creative Nonfiction Award. Landis has a bachelor's degree in English and biology from Goshen College and a doctorate in veterinary medicine from The Ohio State University.