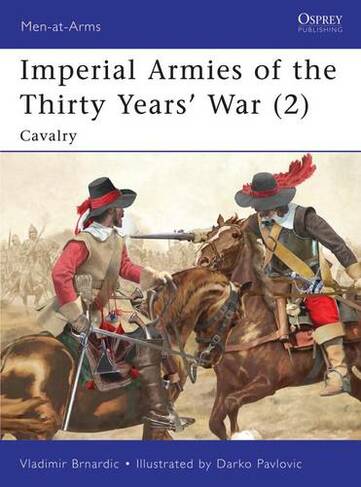 By Vladimir Brnardic (Author), Darko Pavlovic (Illustrator)
Paperback
https://www.whsmith.co.uk/products/imperial-armies-of-the-thirty-years-war-v-2-cavalry-menatarms-no-462/vladimir-brnardic/darko-pavlovic/paperback/9781846039973-01-000.html £11.03 rrp £11.99 Save £0.96 (8%)
GBP
Availability
Currently unavailable. We don't know when or if this item will be back in stock
Share

This history of the Catholic armies of the Habsburg Empire that fought in the Thirty Years' War explores the role of cavalry during the last major religious war in mainland Europe, which saw the end of the large mercenary forces and the beginnings of the well-disciplined national army. This book charts this progression, illustrating and explaining the forces of the key Catholic armies, while exploring the organization, tactics, and colourful uniforms of the cavalry forces as they were expertly wielded by the great captains of the period including Tilly, Conde and Gustavus. Illustrations (some col.), port.

Vladimir Brnardic was born in Zagreb in 1973. After graduating from the University of Zagreb with a History degree, he trained as a journalist in the Documentary Program of Croatian Television. He has a keen interest in the history of Central and Eastern European military organisations from the 15th to19th century, especially those of the Napoleonic period. He is married and currently lives and works in Zagreb, Croatia.