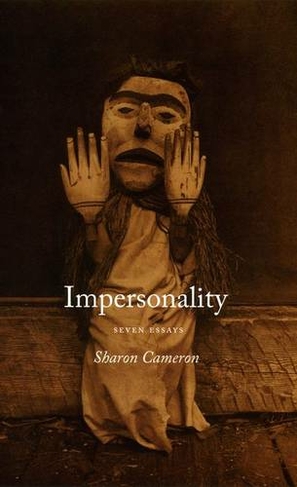 Philosophers have long debated the subjects of person and personhood. Sharon Cameron ushers this debate into the literary realm by considering impersonality in the works of major American writers and figures of international modernism--writers for whom personal identity is inconsequential and even imaginary. In essays on William Empson, Jonathan Edwards, Ralph Waldo Emerson, Herman Melville, T. S. Eliot, and Simone Weil, Cameron examines the impulse to hollow out the core of human distinctiveness, to construct a voice that is no one's voice, to fashion a character without meaningful attributes, a being that is virtually anonymous. "To consent to being anonymous," Weil wrote, "is to bear witness to the truth. But how is this compatible with social life and its labels?" Throughout these essays Cameron examines the friction, even violence, set in motion from such incompatibility--from a "truth" that has no social foundation. Impersonality investigates the uncompromising nature of writing that suspends, eclipses, and even destroys the person as a social, political, or individual entity, of writing that engages with personal identity at the moment when its usual markers vanish or dissolve. 2 halftones

Sharon Cameron is the William R. Kenan Jr. Professor of English at the Johns Hopkins University. Among her many publications are Thinking in Henry James, Choosing Not Choosing: Dickinson's Fascicles, and Beautiful Work: A Meditation on Pain, the first two published by the University of Chicago Press.