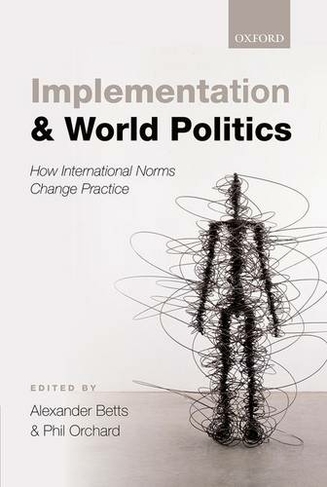 A significant amount of International Relations scholarship examines the role of international norms in world politics. Existing work, though, focuses mainly on how these norms emerge and the process by which governments sign and ratify them. In conventional accounts, the story ends there. Yet, this tells us very little about the conditions under which these norms actually make any difference in practice. When do these norms actually change what happens on the ground? In order to address this analytical gap, the book develops an original conceptual framework for understanding the role of implementation in world politics. It applies this framework to explain variation in the impact of a range of people-centred norms relating to humanitarianism, human rights, and development. The book explores how the same international norms can have radically different effects in different national and local contexts, or within particular organizations, and in turn how this variation can have profound effects on people's lives. How do international norms change and adapt at implementation? Which actors and structures matter for shaping whether implementation actually takes place, and on whose terms? And what lessons can we derive from this for both International Relations theory and for international public policy-makers? Collectively, the chapters explore these themes by looking at three different types of norms - treaty norms, principle norms, and policy norms - across policy fields that include refugees, internal displacement, crimes against humanity, the use of mercenaries, humanitarian assistance, aid transparency, civilian protection, and the responsibility to protect.

Alexander Betts' research focuses on the international politics of refugees, migration, and humanitarianism, with a focus on Sub-Saharan Africa. His recent books include Forced Migration and Global Politics (2009), Protection by Persuasion: International Cooperation in the Refugee Regime (2009), Refugees in International Relations (with Gil Loescher, 2010), Global Migration Governance (2011), UNHCR: The Politics and Practice ofRefugee Protection (with Gil Loescher and James Milner, 2012), and Survival Migration: Failed Governance and the Crisis of Displacement (2013). He has worked as a consultant to UNHCR, OCHA, UNDP, IOM, UNICEF, and the Council of Europe. He has also held teaching and research positions at Stanford University, the Universite Libre deBruxelles, and the University of Texas at Austin. He is Director of the Refugee Studies Centre and Associate Professor in the Department of International Development at the University of Oxford.Phil Orchard holds a PhD from the University of British Columbia, and previously worked as the Assistant to the Representative of the UN Secretary-General for Internally Displaced Persons. His research focuses primarily on international efforts to provide institutional and legal forms of protection to civilians and forced migrants. He is the author of A Right to Flee: Refugees, States, and the Construction of International Cooperation (2014). His work has been published in GlobalGovernance, International Affairs, and the Review of International Studies, among other journals. He is Lecturer in International Relations and Peace and Conflict Studies at the University of Queensland, where he directs the Masters in International Studies program, and a Research Associate with the Asia-PacificCentre for the Responsibility to Protect.