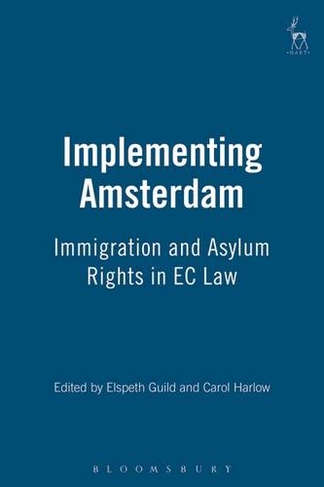 Until the Amsterdam Treaty,law and policymaking in the field of immigration remained a national function, though in practice there was much co-operation (the so-called Third Pillar). Now these powers have been transferred to the European Community as First Pillar powers. Only Denmark, Ireland and the UK have opted out. This book looks at the likely effects of this substantial transfer of powers to the Community. How will the powers and responsibilities be divided? How should the powers be exercised? Will there be input from the public into policymaking? What role will Parliaments play? Will migrants suffer? The foremost scholars from many European countries try to answer these and other questions, offering a variety of legal and social viewpoints. Contributors: Pieter Boeles (Amsterdam and Leiden), Antje Weiner (Hannover), Cristina Gortazar (Madrid), Guy Goodwin-Gill (Oxford), Nicholas Blake QC (London), Johannes van der Klaauw (UNHCR Brussels), Jens Vedsted Hansen (Aahus), Elspeth Guild (Nijmegen and London), Kees Groenendijk (Nijmegen), Gisbert Brinkmann (Bonn), John Crowley (CERI, Paris), Deirdre Curtin (Utrecht), Roger Errera (Paris), Steve Peers (Essex), Carol Harlow (LSE), Gregor Noll (Lund). black & white illustrations