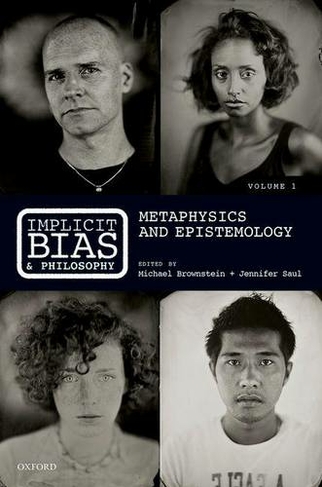 There is abundant evidence that most people, often in spite of their conscious beliefs, values and attitudes, have implicit biases. 'Implicit bias' is a term of art referring to evaluations of social groups that are largely outside conscious awareness or control. These evaluations are typically thought to involve associations between social groups and concepts or roles like 'violent,' 'lazy,' 'nurturing,' 'assertive,' 'scientist,' and so on. Such associations result at least in part from common stereotypes found in contemporary liberal societies about members of these groups. Implicit Bias and Philosophy brings the work of leading philosophers and psychologists together to explore core areas of psychological research on implicit (or unconscious) bias, as well as the ramifications of implicit bias for core areas of philosophy. Volume I: Metaphysics and Epistemology is comprised of two sections: 'The Nature of Implicit Attitudes, Implicit Bias, and Stereotype Threat,' and 'Skepticism, Social Knowledge, and Rationality.' The first section contains chapters examining the relationship between implicit attitudes and 'dual process' models of the mind; the role of affect in the formation and change of implicit associations; the unity (or disunity) of implicit attitudes; whether implicit biases are mental states at all; and whether performances on stereotype-relevant tasks are automatic and unconscious or intentional and strategic. The second section contains chapters examining implicit bias and skepticism; the effects of implicit bias on scientific research; the accessibility of social stereotypes in epistemic environments; the effects of implicit bias on the self-perception of members of stigmatized social groups as rational agents; the role of gender stereotypes in philosophy; and the role of heuristics in biased reasoning. This volume can be read independently of, or in conjunction with, a second volume of essays, Volume II: Moral Responsibility, Structural Injustice, and Ethics, which explores the themes of moral responsibility in implicit bias, structural injustice in society, and strategies for implicit attitude change.

Michael Brownstein is Assistant Professor of Philosophy at John Jay College/City University of New York. His research focuses on philosophy of psychology and cognitive science, with emphasis on the nature of the implicit mind. In 2014-2015 he was a Visiting Scholar at the American Academy of Arts and Sciences, a Fellow of the American Council of Learned Societies, and visiting faculty at Deep Springs College. His published articles on automaticity, spontaneity, andimplicit bias have appeared in journals such as Philosophical Studies, Mind and Language, and the Stanford Encyclopedia of Philosophy. These mark a small transition from his first publication, 'The Wonderful World of Tame Reptiles', in Reptile Hobbyist.Jennifer Saul is Professor of Philosophy at the University of Sheffield and Director of the Society for Women in Philosophy UK. Her research is primarily in philosophy of language, feminist philosophy, and philosophy of race. She is the author of Lying, Misleading, and What is Said (OUP, 2012); Simple Sentences, Substitution, and Intuitions (OUP, 2007); and Feminism: Issues and Arguments (OUP, 2003). She directed the Leverhulme International Network in Implicit Biasand Philosophy (2011-2013) that gave rise to these volumes. She has also served as a consultant on a zombie movie script.