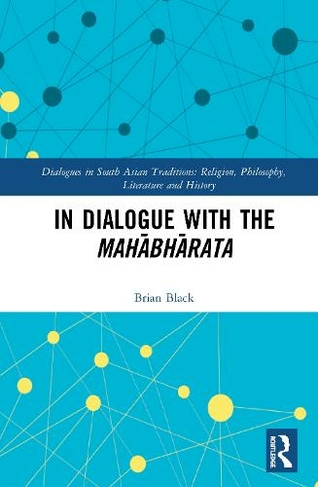 In Dialogue with the Mahabharata: (Dialogues in South Asian Traditions: Religion, Philosophy, Literature and History)

The Mahabharata has been explored extensively as a work of mythology, epic poetry, and religious literature, but the text's philosophical dimensions have largely been under-appreciated by Western scholars. This book explores the philosophical implications of the Mahabharata by paying attention to the centrality of dialogue, both as the text's prevailing literary expression and its organising structure. Focusing on five sets of dialogues about controversial moral problems in the central story, this book shows that philosophical deliberation is an integral part of the narrative. Black argues that by paying attention to how characters make arguments and how dialogues unfold, we can better appreciate the Mahabharata's philosophical significance and its potential contribution to debates in comparative philosophy today. This is a fresh perspective on the Mahabharata that will be of great interest to any scholar working in religious studies, Indian/South Asian religions, comparative philosophy, and world literature.

Brian Black received his MA and PhD at SOAS (University of London) and is now a lecturer in the Department of Politics, Philosophy and Religion at Lancaster University. His research interests include Indian religion and philosophy, comparative philosophy, the use of dialogue in Indian religious and philosophical texts, and Hindu and Buddhist ethics. He is author of the book The Character of the Self in Ancient India: Priests, Kings, and Women in the Early Upanisads.