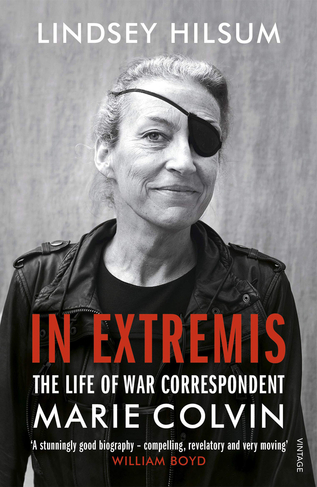 In Extremis: The Life of War Correspondent Marie Colvin

By Lindsey Hilsum (Author)
Paperback
https://www.whsmith.co.uk/products/in-extremis-the-life-of-war-correspondent-marie-colvin/lindsey-hilsum/paperback/9781784703950-12-000.html £8.19 rrp £9.99 Save £1.80 (18%)
GBP
Availability
In Stock
Free Delivery Available When You Spend £25 Or More
Details
Spend £25 On Eligible Products To Receive Free Standard Delivery To You Home Or Free Next Working Day Click And Collect To Store
Share

The gripping life story of the great war correspondent Marie Colvin told by one of her closest friends SHORTLISTED FOR THE COSTA BIOGRAPHY AWARD WINNER OF THE JAMES TAIT BLACK AWARD Marie Colvin was glamorous, hard-drinking, braver than the boys, with a troubled and rackety personal life. She reported from the most dangerous places in the world and her anecdotes about encounters with figures like Colonel Gaddafi and Yasser Arafat were incomparable. She was much admired, and as famous for her wild parties as for the extraordinary lengths to which she went to tell the story. Fellow foreign correspondent Lindsey Hilsum draws on unpublished diaries and interviews with friends, family and colleagues to produce a story of one of the most daring and inspirational women of our times. A Sunday Times Book of the Year 'A stunningly good biography' WILLIAM BOYD

Lindsey Hilsum is Channel 4 News International Editor. She has covered many of the conflicts of recent years, including Syria, Ukraine and the Arab Spring - sometimes alongside Marie Colvin. In 1994, she was the only English-speaking foreign correspondent in Rwanda when the genocide began. She was in Belgrade for the 1999 NATO bombing of Serbia, and in Baghdad for the 2003 US invasion of Iraq. She has won awards from the Royal Television Society and BAFTA amongst others, and was the recipient of the 2017 Patron's Medal from the Royal Geographical Society. Her last book Sandstorm: Libya from Gadaffi to Revolution was described by the Observer as 'an account with historical depth to match dramatic reportage.' In Extremis was shortlisted for the Costa Biography Award and won the James Tait Black Award.