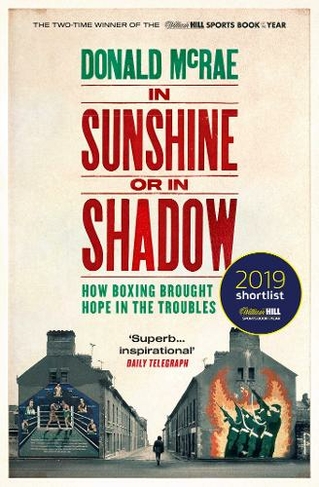 In Sunshine or in Shadow: Shortlisted for the William Hill Sports Book of the Year Prize

By Donald McRae (Author)
Paperback
https://www.whsmith.co.uk/products/in-sunshine-or-in-shadow-shortlisted-for-the-william-hill-sports-book-of-the-year-prize/donald-mcrae/paperback/9781471163135-12-000.html £8.19 rrp £9.99 Save £1.80 (18%)
GBP
Availability
In Stock
Free Delivery Available When You Spend £25 Or More
Details
Spend £25 On Products To Receive Free Standard Delivery To Your Home Or Free Next Working Day Click And Collect To Store

SHORTLISTED FOR THE WILLIAM HILL SPORTS BOOK OF THE YEAR PRIZE 'One of the most captivating boxing writers on the planet' Barry McGuigan 'A superb tale...His inspirational story celebrates peace and reconciliation' Daily Telegraph Multi-award-winning author Donald McRae's stunning new book is a powerful tale of hope and redemption across the sectarian divide in Northern Ireland - thanks to boxing. At the height of the Troubles, Gerry Storey ran the Holy Family gym from the IRA's heartland territory of New Lodge in Belfast. Despite coming from a family steeped in the Republican movement, he insisted that it would be open to all. He ensured that his boxers were given a free pass by paramilitary forces on both Republican and Loyalist sides, so they could find a way out of the province's desperate situation. In the immediate aftermath of the 1981 Hunger Strikes, Storey would also visit the Maze prison twice a week to train the inmates from each community, separately. In itself, this would be a heroic story, but Storey went further than that: he became the trainer for world champion Barry McGuigan and Olympian Hugh Russell, who became one of the most famous photographers to document the Troubles. Even with all his success and the support of both sides, Storey still found himself subjected to three bomb attacks from those who were implacably hostile to any form of reconciliation. He also worked with the Protestant boxer Davy Larmour, who fought two bloody battles in the ring against Russell, his Catholic friend. At the same time, in Derry, the British and European lightweight champion Charlie Nash fought without bitterness after his brother was killed and his father was shot on Bloody Sunday - the most infamous day of the conflict. Now, Donald McRae reveals the extraordinary tale of those troubled times. After years of research and intimate interviews with the key characters in this story, he shows us how the violent business of boxing became a haven of peace and hope for these remarkable and compassionate men. In Sunshine or in Shadow is an inspirational story of triumph over adversity and celebrates the reconciliation that can take place when two fighters meet each other in the ring, rather than outside it. '[An] outstanding and important book, Don McRae's powerful storytelling shows the courage of the people of the North' Andy Lee 1 x 8pp colour photographs

Donald McRae is the award-winning author of eleven non-fiction books, which have featured sporting icons, legendary trial lawyers and heart surgeons. He has twice won the prestigious William Hill Sports Book of the Year, for Dark Trade and In Black & White. He is a three-time Interviewer of the Year winner and has also won Sports Feature Writer of the Year on three separate occasions for his work in the Guardian. He lives in Hertfordshire.