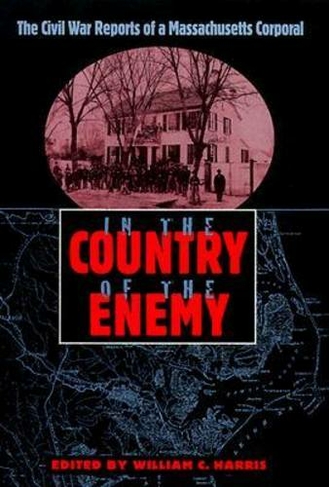 In the Country of the Enemy: The Civil War Reports of a Massachusetts Corporal (New Perspectives on the History of the South)

By William C. Harris (Contributor), John David Smith (Contributor)
Hardback
https://www.whsmith.co.uk/products/in-the-country-of-the-enemy-the-civil-war-reports-of-a-massachusetts-corporal-new-perspectives-on-th/william-c-harris/john-david-smith/hardback/9780813016788-01-000.html £31.50
GBP
Availability
Currently unavailable. We don't know when or if this item will be back in stock
With Free Saver Delivery
Details
FREE SHIPPING over £20 for Saver Delivery
Share

"Anyone interested in the Civil War along the eastern seaboard--and most especially North Carolina--will applaud the availability of a scholarly, well-edited edition of the Haines book."--Daniel Sutherland, University of Arkansas "The most comprehensive account by a private soldier of the 1862-1863 campaigns in North Carolina."--Civil War Books: A Critical Bibliography Last printed by the, Boston Herald in 1863, Corporal Zenas T. Haines's dispatches from the Civil War in eastern North Carolina provide a lively, detailed account of the history of a Massachusetts regiment operating in the hostile southern coastal lowlands during the winter of 1862-63. In reports originally prepared for the Herald, Haines follows the organization, training, occupation, and combat service of the 44th Massachusetts from recruitment to mustering out. Observing these citizen soldiers with a journalist's eye for detail and color, Haines describes their motivation, experience in combat, diversions in camp, and perspectives on and reactions to the people and countryside of the Confederate home front through which they passed. Especially valuable are their remarks about slaves (including those enlisting in the African Brigade) and their strong sentiments in support of emancipation and the recruitment of blacks in the Federal army. Haines's reports are important for their on-the-spot history of the entire life span of a regiment of novitiate urban soldiers and their critical role in defeating the Confederate army's effort to drive Union forces from eastern North Carolina. William C. Harris's introduction places these reports in the broader context of the nine-month troops raised by the War Department and provides additional background on the individual men of the 44th Massachusetts, their purposes in joining the regiment, and the history of the war in eastern North Carolina. Virtually unknown by Civil War students and aficionados, Haines's reports expand our knowledge of Union soldiers during the Civil War and provide new insights both on the middle-class urban men who volunteered for service and on the region of the Confederacy in which they operated. William C. Harris, professor of history at North Carolina State University in Raleigh, is the author of seven books on Civil War and Reconstruction topics, including With Charity for All: Lincoln and the Restoration of the Union, which was a recipient of the 1998 Lincoln Prize for Civil War scholarship. 4 b&w photographs, 1 map, notes, bibliography, index