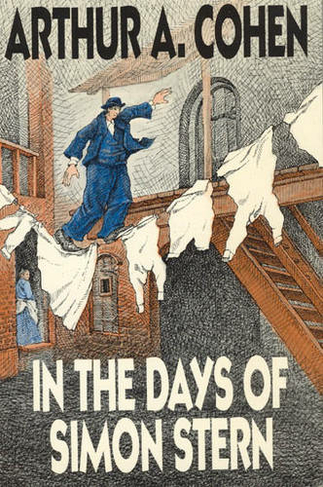 In the Days of Simon Stern New edition

Nathan, a blind Jewish scribe, tells the story of the coming of the Messiah in the person of one Simon Stern--from his birth on the Lower East Side, through his career as a millionaire dealer in real estate, to his building of a refuge for the Jewish remnant of World War II. "A majestic work of fiction that should stand world literature's test of time, to be read and reread. A masterpiece."--Commonweal "This book ensnares one of the most extraordinarily daring ideas to inhabit an American novel in a number of years. For one thing, it is that risky devising, dreamed of only by the Thomas Manns of the world, a serious and vastly conceived fiction bled out of the theological imagination. For another, it is clearly an 'American' novel--altogether American, despite its Jewish particularity: it is not so much about the history of the Jews as it is about the idea of the New World as haven. . . . In its teeming particularity every vein of this book runs with a brilliance of Jewish insight and erudition to be found in no other novelist. Arthur Cohen is the first writer of any American generation to compose a profoundly Jewish fiction on a profoundly Western theme."--Cynthia Ozick, New York Times Book Review "This stately, ambitious amalgam of Jewish myth, history, theology, and speculations on the Jewish soul is like an enormous Judaic archeological ruin--often hard for the uninitiated to interpret, but impressive. . . . Intelligent, inventive, fascinating."--New Yorker vi, 464 p.

Arthur A. Cohen (1928-1986), novelist, essayist, and theologian, received the Edward Lewis Wallant Award in 1973 for In the Days of Simon Stern and the National Jewish Book Award in 1984. His A People Apart was nominated for a National Book Award in 1972. Cohen's novels Acts of Theft and A Hero in His Time are also available in Phoenix Fiction paperback editions from the University of Chicago Press.