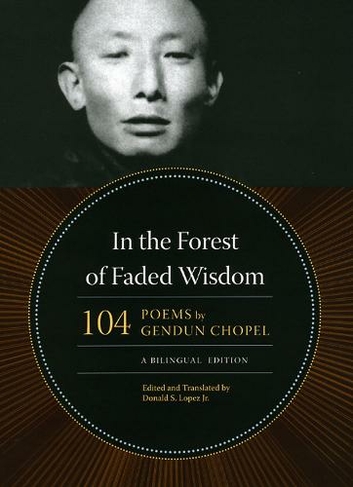 In the Forest of Faded Wisdom 104 Poems by Gendun Chopel, a Bilingual Edition

In a culture where poetry is considered the highest form of human language, Gendun Chopel is revered as Tibet's greatest modern poet. Born in 1903 as British troops were preparing to invade his homeland, he was identified at any early age as the incarnation of a famous lama and became a Buddhist monk, excelling in the debating courtyards of the great monasteries of Tibet. At the age of thirty-one, he gave up his monk's vows and set off for India, where he would wander, often alone and impoverished, for over a decade. Returning to Tibet, he was arrested by the government of the young Dalai Lama on trumped-up charges of treason, emerging from prison three years later a broken man. He died in 1951 as troops of the People's Liberation Army marched into Lhasa. Throughout his life, from his childhood to his time in prison, Gendun Chopel wrote poetry that conveyed the events of his remarkable life. "In the Forest of Faded Wisdom" is the first comprehensive collection of his oeuvre in any language, assembling poems in both the original Tibetan and in English translation. A master of many forms of Tibetan verse, Gendun Chopel composed heartfelt hymns to the Buddha, pithy instructions for the practice of the dharma, stirring tributes to the Tibetan warrior-kings, cynical reflections on the ways of the world, and laments of a wanderer, forgotten in a foreign land. These poems exhibit the technical skill for which Gendun Chopel was known and reveal the poet to be a consummate craftsman, skilled in both Tibetan and Indian poetics. With a directness and force often at odds with the conventions of belles lettres, this is a poetry that is at once elegant and earthy.

Donald S. Lopez Jr. is the Arthur E. Link Distinguished University Professor of Buddhist and Tibetan Studies in the Department of Asian Languages and Cultures at the University of Michigan. He is the author or editor of several books, including, most recently The Madman's Middle Way: Reflections on Reality of the Tibetan Monk Gendun Chopel and Buddhism and Science: A Guide for the Perplexed, both published by the University of Chicago Press.