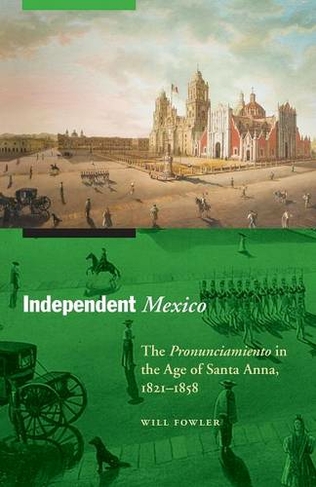 Independent Mexico: The Pronunciamiento in the Age of Santa Anna, 1821-1858 (The Mexican Experience)

In mid-nineteenth-century Mexico, garrisons, town councils, state legislatures, and an array of political actors, groups, and communities began aggressively petitioning the government at both local and national levels to address their grievances. Often viewed as a revolt or a coup d'etat, these pronunciamientos were actually a complex form of insurrectionary action that relied first on the proclamation and circulation of a plan that listed the petitioners' demands and then on endorsement by copycat pronunciamientos that forced the authorities, be they national or regional, to the negotiating table. In Independent Mexico, Will Fowler provides a comprehensive overview of the pronunciamiento practice following the Plan of Iguala. This fourth and final installment in, and culmination of, a larger exploration of the pronunciamiento highlights the extent to which this model of political contestation evolved. The result of more than three decades of pronunciamiento politics was the bloody Civil War of the Reforma (1858-60) and the ensuing French Intervention (1862-67). Given the frequency and importance of the pronunciamiento, this book is also a concise political history of independent Mexico. 1 chronology, 2 maps

Will Fowler is a professor of Latin American studies at the University of St. Andrews in Scotland. He is the author or editor of several books, including Forceful Negotiations; Malcontents, Rebels, and "Pronunciados"; and Celebrating Insurrection, all published by the University of Nebraska Press.