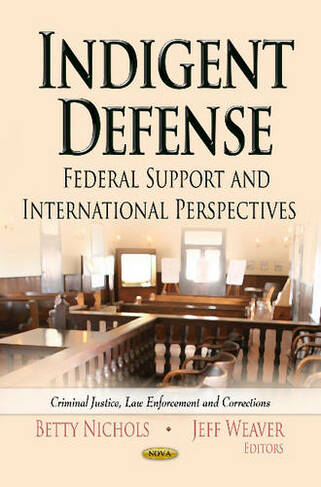 By Betty Nichols (Contributor), Jeff Weaver (Contributor)
Hardback
https://www.whsmith.co.uk/products/indigent-defense-federal-support-and-international-perspectives/betty-nichols/jeff-weaver/hardback/9781622574414-12-000.html £186.29 rrp £206.99 Save £20.70 (10%)
GBP
Availability
In Stock
With Free Standard Delivery To Your Home Or Store
Details
Spend £25 On Eligible Products To Receive Free Standard Delivery To You Home Or Free Next Working Day Click And Collect To Store
Share

Pursuant to the Sixth Amendment to the U.S. Constitution, every person accused of a crime is afforded the right to have counsel in his or her defence, even if unable to afford such representation. Individuals accused of a crime but unable to afford representation, referred to as indigent defendants, often rely on entities such as public defender offices for the provision of counsel. Several organisations, including the National Legal Aid and Defender Association, conducted national studies of indigent defence, pointing out many challenges in providing counsel across the country, including inadequate funding of defence programs as a whole, inadequate compensation for assigned counsel, lack of investigative resources, inexperienced counsel, and under-staffing of public defence offices. In affording indigent defendants their right to counsel, both state and local governments generally decide the type of indigent defence programs to employ and how to fund them. This book provides a look at federal support and international perspectives of indigent defence.