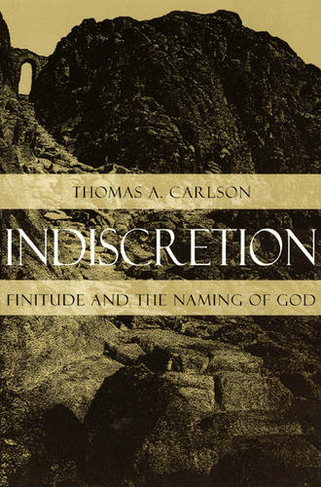 Indiscretion Finitude and the Naming of God 2nd ed.

How can one think and name an inconceivable and ineffable God? Christian mystics have approached the problem by speaking of God using "negative" language - devices such as grammatical negation and the rhetoric of "darkness" or "unknowing" - and their efforts have fascinated contemporary scholars. In this text, Thomas A. Carlson reinterprets premodern approaches to God's ineffability and postmodern approaches to the mystery of the human subject in light of one another. The recent interest in mystical theological traditions, Carlson argues, is best understood in relation to contemporary philosophy's emphasis on the idea of human finitude and mortality. Combining both historical research in theology (from Pseudo-Dionysius to Aquinas to Eckhart) and contemporary philosophical analysis (from Hegel and Nietzsche to Heidegger, Derrida, and Marion), this text should interest philosophers, theologians, and other scholars concerned with the possibilities and limits of language surrounding both God and human subjectivity.

Thomas A. Carlson is professor of religious studies and founding director of the Humanities and Social Change Center at the University of California, Santa Barbara. He is the author of Indiscretion: Finitude and the Naming of God and The Indiscrete Image: Infinitude and Creation of the Human, both also published by the University of Chicago Press.