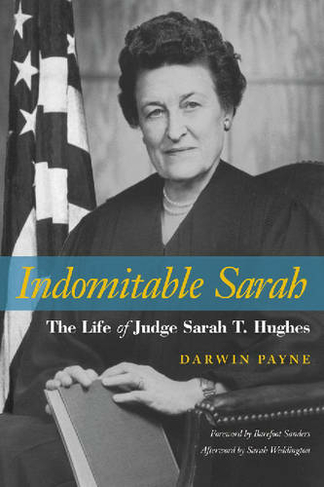 Judge Sarah T. Hughes is best remembered as the woman who swore in Lyndon Johnson as president aboard Air Force One on November 22, 1963, after President John F. Kennedy was assassinated. But long before then, she had been making headlines as the foremost woman Democrat in Texas. She was a legislator, judge, political leader, and feminist who devoted her life to liberal causes. As a federal judge she presided over the three-judge panel that overturned Texas's abortion laws in a decision upheld by the U.S. Supreme Court in Roe v. Wade, a decision that has rocked American society and politics to this day. Indomitable Sarah is an energetic, well-researched biography that shows the many dimensions of this important figure in Texas' history as well as the nation's. 35 b/w photographs, bibliography, index

Darwin Payne, professor emeritus of communications at Southern Methodist University, has published biographies of Frederick Lewis Allen and Owen Wister as well as many other books. He holds a Ph.D. in American civilization from the University of Texas at Austin. He is currently working on a biography of Erik Jonsson, a founder of Texas Instruments and former mayor of Dallas.