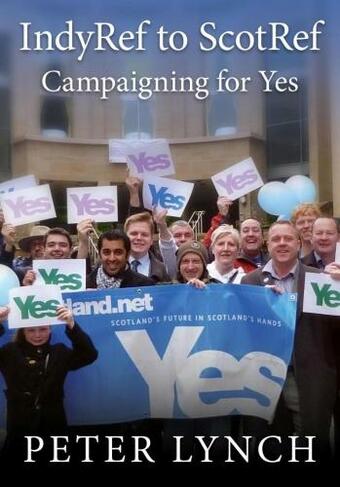 IndyRef to ScotRef Campaigning for Yes

The Scottish independence referendum of 2014 was the most colourful, dynamic and longest political campaign Scotland has ever seen and which, in IndyRef to ScotRef , is lovingly recounted through the experiences of a university lecturer turned Yes for Scotland activist who was inspired to roll up his sleeves and get involved in his native city of Edinburgh. Sharing a personal journey that will resonate with tens of thousands of Scots, from all backgrounds and walks of life, who found themselves drawn to Campaigning for Yes, Peter Lynch describes his transition from an academic observer of the referendum to an active participant. Through his early involvement with local Yes groups to a deeper immersion in the grassroots campaign with leafleting, street stalls, door-to-door canvassing, public meetings, electoral registration and the many political carnivals held across Edinburgh in pursuit of a Yes vote, Lynch also rediscovered the city he grew up in and describes how it had been effected by decades of economic, political and social change. When Yes Scotland was launched in May 2012, support for independence stood at 23% but, as the IndyRef campaign galvanised and inspired the nation to debate its future in a way that caught the imagination of hundreds of thousands of previously non-politically active Scots, support for independence grew steadily reaching 44.7% - 1,617,989 votes - on 18th September 2014; referendum day. Of interest to supporters of independence and neutral observers alike, IndyRef to ScotRef explains how, despite losing the vote, many Yes activists soon concluded that the referendum campaign had fundamentally changed their lives as well as the political landscape of Scotland and committed themselves to `get it right next time': it was the beginning, not the end. In the final chapters of IndyRef to ScotRef, Peter Lynch analyses the huge political events that have occurred in Scotland and the rest of the UK since September 2014, which have seen the SNP's domination of Scottish politics and Britain voting for Brexit despite Scotland voting to Remain, resulting in the decision of the Scottish Parliament in March 2017 to call for a further independence referendum. With an eye on ScotRef, whenever it comes, Lynch warns `Yessers' to be realistic and prepared, outlining what must be done to secure a `Yes' for Scotland. 85+ b/w photographs