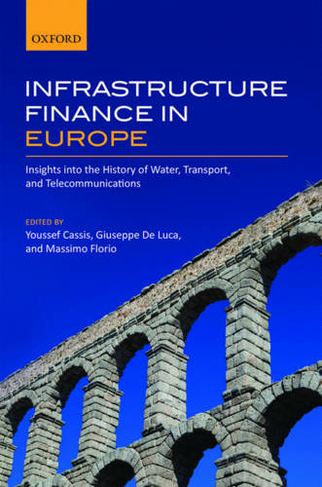 Infrastructure Finance in Europe Insights into the History of Water, Transport, and Telecommunications

Funding infrastructure has always been a challenging issue in any country and at any time, yet the topic is still largely unexplored. The social returns of investment in water, roads, railways, or more recently telegraph or communication satellites are often apparent in the long run, but this distant horizon poses special problems to governments and investors. This volume provides a broad overview of the main financing solutions implemented in Europe to support infrastructures from the fall of the Roman Empire up to the end of the 20th century. It explores the diverse historical paths pursued in order to solve the problem of infrastructure finance in various European countries, and draws upon the findings of an international and interdisciplinary research project. It brings together case studies by economic historians, economists, and engineers, and the clear taxonomy guides the reader through the financing solutions that have been developed to fund infrastructure over almost three thousand years. The volume is organized into four parts; after an introductory chapter by the editors, Part One offers 'horizontal' contributions that cover the history of European infrastructure finance. Parts Two, Three, and Four each focus on a single sector, namely water, transport, and telecommunications. The findings show how history can inform thinking on contemporary infrastructure problems.

Youssef Cassis is Professor of Economic History at the European University Institute, Florence. His work mainly focuses on banking and financial history, as well as business history more generally. His numerous publications on the subject include City Bankers, 1890-1914 (Cambridge University Press, 1994), Big Business. The European Experience in the Twentieth Century (Oxford University Press, 1997), Capitals of Capital. A History ofInternational Financial Centres, 1780-2005 (Cambridge University Press, 2006), and Crises and Opportunities. The Shaping of Modern Finance (Oxford University Press, 2011). He was the cofounder, in 1994, of Financial History Review (Cambridge University Press) and is a past President (2005-2007) of the European Business HistoryAssociation.Giuseppe De Luca is Associate Professor of Economic History at the University of Milan. He holds a PhD in Economic and Social History from the University Bocconi and has been visiting professor at the Complutense University of Madrid and at the University of Valladolid. He is a specialist in early modern European finance and financing, with a focus on Italy and the Spanish Empire. He is currently collaborating on cross-country comparisons of informal credit markets, on a Spanish NationalResearch Council project on 'Banks in Madrid and Milan under the Habsburgs'.Massimo Florio is Professor of Public Economics and the Jean Monnet Chair 'ad personam' of EU Industrial Policy at the University of Milan, where he has also been the head of the Department of Economics, Business, and Statistics. He has been a visiting scholar at the London School of Economics, where he started his research on privatisation, leading to his books The Great Divestiture (MIT Press, 2004) and more recently Network Industries and Social Welfare (OUP, 2013). Formore than 20 years, Professor Florio has advised the European Commission and other international organisations on social cost-benefit analysis of infrastructure projects.