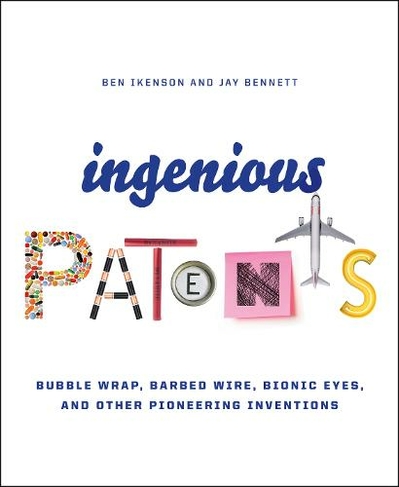 By Ben Ikenson (Author), Jay Bennett (Author)
Hardback
https://www.whsmith.co.uk/products/ingenious-patents-revised-bubble-wrap-barbed-wire-bionic-eyes-and-othe/ben-ikenson/jay-bennett/hardback/9780316438490-12-000.html £15.19 rrp £18.99 Save £3.80 (20%)
GBP
Availability
In Stock
With Free Standard Delivery To Your Home Or Store
Details
Spend £15 On Eligible Products To Recieve Free Standard Delivery To You Home Or Free Next Working Day Click And Collect To Store
Share

Discover some of the most innovative of the 6.5 million patents that the U.S. Patent and Trademark Office has granted since Thomas Jefferson issued the first one in 1790. Updated and reformatted from the original 2004 edition, Ingenious Patents presents each device along with background about the inventor, interesting sidebars and history, and an excerpt from the original patent application. Liberally sprinkled throughout are photos of original models and patent diagrams created by the inventors themselves and annotated to show exactly how each item works. Entries include creative commercial successes in fields as diverse as medicine, aeronautics, computing, agriculture, and consumer goods. Readers are certain to find a topic of interest here, whether it is the history behind the patent for a Pez dispenser, cathode ray tube, kitty litter, DNA fingerprinting, or the design of a Fender Stratocaster guitar. 200 b/w photographs